When we think of the environment and the challenges that lie ahead, climate change is probably the biggest test Europe and the world will face in the coming years.

The devastating floods that hit Belgium, Germany and the Netherlands in July – some of the worst natural disasters in Western Europe in centuries are just an example, as are the sandstorms that blanketed Brazilian cities in recent days or this summer’s forest fires in Greece. These phenomena are worrisome and global, and the reason why countries and institutions worldwide have been putting their heads together to formulate solutions and come forth with new targets at the upcoming COP26 in Glasgow. 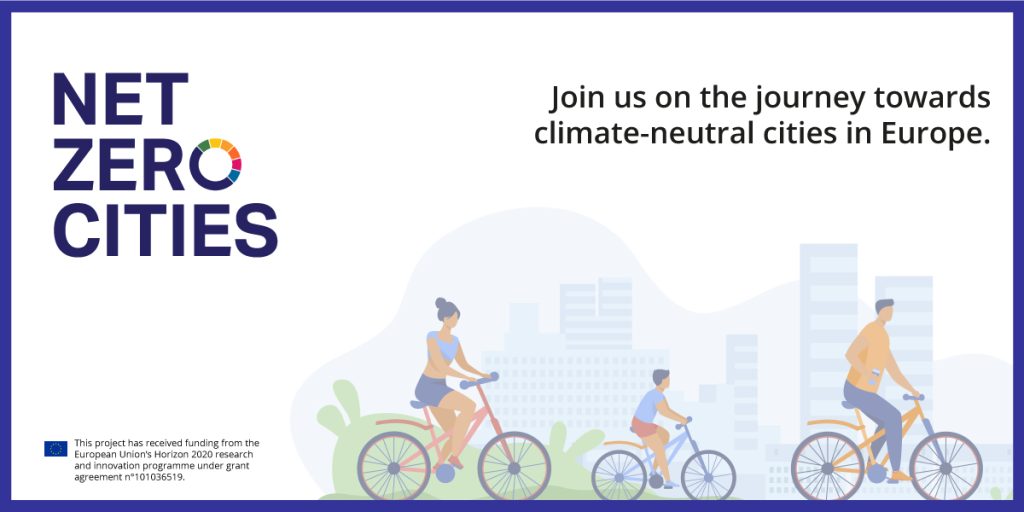 The European Commission has launched a series of ambitious initiatives (called ‘missions’) to bring solutions to this and other major climate challenges, laying out proposals to be implemented over the next decade.

As part of the Horizon 2020 Research and Innovation Programme in support of the European Union’s Green Deal and EU’s mission “100 Climate-Neutral and Smart Cities by 2030” a new project, NetZeroCities, was launched on 1 October to support the delivery of the Mission. It will be fundamental in supporting Europe to fulfil its target of at least 55% emissions reduction by 2030 (based on 1990 levels) and to achieve climate neutrality before 2050 giving cities a prominent role in such an ambitious task. In fact, cities will lead the way in decarbonisation efforts to achieve zero carbon as fast as possible securing the well-being of European communities.

NetZeroCities was conceived by the board for the Climate Neutral and Smart Cities Mission with the goal of having “100 climate neutral cities by 2030”; Anna Lisa Boni, Secretary General, Eurocities is one of the board’s 15 advisory experts.

In order to reach climate neutrality, cities will lead and take part in systemic changes that will request the support and collaboration of governments, industry, civil society and citizens.

We aim to develop and deliver great support and services to cities to help them achieve climate neutrality by 2030.

“Whilst the formal methodology for measuring climate neutrality hasn’t been given yet, essentially climate neutrality is reducing emissions as close to zero as possible, and finding ways to offset the remainder through actions which create or expand carbon sinks such as reforestation, habitat rehabilitation, and many others,” explains Brooke Flanagan, Senior Project Coordinator at Eurocities.

NetZeroCities is “really about helping to put the Mission into action,” explains Flanagan. Providing a One Stop Shop for cities to find all the information, support and innovative approaches they need, bringing cities together and sharing good practices for replication and contributing to the development of the Climate City Contract process and policy recommendations are some of the tasks that Eurocities will be responsible for throughout the project, which is coordinated by EIT Climate-KIC and counts on the participation of 32 other partners, such as universities, think-tanks, associations, consultancies and research organisations from 13 countries.

Eurocities’ role, says Flanagan, “is to give cities the tools to engage and co-create with all of these stakeholders to develop their plans to achieve climate neutrality, support them through the process and help them tackle some of the more difficult challenges they encounter with new, innovative and systemic solutions.”

Cities will join the project with an initial goal to develop a Climate City Contract (CCC). Expressions of Interest to become a Mission City and start the CCC process will open in November 2021 and will be coordinated by the EU Commission.

The CCC is a politically binding contract (not legally binding, though), an expression of interest and a political and goal-oriented engagement of the cities to pursue climate neutrality. NetZeroCities will also define a roadmap and support cities throughout the process, engaging them and assuring transparency, accountability and a reflexive learning process.

Obviously, it’s a huge challenge and it will require everyone within a city – the city administration, citizens, businesses, academia, civil society – as well as national governments and the EU, to contribute.

Along the way, the project will count on a go-to platform, the One-Stop Shop, a meeting point for cities to get information, guidance and systemic solutions, and to collaborate amongst themselves and with participating institutions and organisations — the operation of which will be the responsibility of Eurocities.

In other words, the platform will serve as a repository for all the existing information on the design and implementation of climate actions, as well as developing new content to fill the gaps and providing a systemic approach to these solutions. It will also provide an online space for Mission cities to exchange knowledge, collaborate and learn from each other.

NetZeroCities will also be offering funding to cities for the development and implementation of pilot projects, which will benefit not only cities involved but also a wider group of cities through a lessons learned model. The expectation is for a large number of cities to join NetZeroCities and to engage in the European goals of emissions reduction and climate neutrality, moving towards a fairer, more sustainable and resilient society.

Flanagan hopes that “ this project and the cities involved will inspire each other, as well as other cities, governments and other stakeholders to speed up their journey to climate neutrality and to bring about the transformation needed to ensure the planet can stay below an average 1.5 degrees temperature rise.”

September 2021 – Mission and Implementation Plan launched by the European Commission