Rumours about migrants are one of the most potent ways of disseminating and consolidating stereotypes. Around 400 agents in Bilbao, Spain, are committed to fighting the spread of falsehoods in the neighbourhoods in which they live.

The project aims to improve coexistence in the municipality by generating safe spaces where all citizens are invited to reflect and share ideas as well as delve into specific topics.

Rumours at the base of hate speech

The anti-rumours project is up and running in various European cities. It aims to counter negative conversations linked to aspects such as social resources, machismo, insecurity, crime, and the labour market. “It is about confronting stereotypes, prejudice and rumours. Those are at the base of potential hate crime behaviours, which would be the top of the pyramid”, says Claudia Emmanuel Laredo, immigration expert in the area of cooperation, cohabitation and festivities of Bilbao.

There will always be people who do bad things, but they have positive references to counteract.

Even though immigration is not displayed in the surveys as one of Bilbao’s top worries, the project focuses on prevention.

“Bilbao doesn’t have any problems with racism. However, issues like housing rental or access to employment have become very complicated,” says Cristina Sanz, a social educator and member of the district’s two social educators’ teams. In her opinion, “if the migrant population is not very visible because it doesn’t have a large presence, there are fewer rumours since people do not perceive this as a reality close to them.”

“On the other hand, the more visible the presence of the migrant population is for society, the more fears or suspicions it arises. And therefore, more rumours and more news that are not true.” The socio-economic situation is another critical factor, Sanz adds.

Five out of Bilbao’s eight districts have agents assigned, and they are currently working on the sixth. “Every time we go to a neighbourhood, we map the territory to identify key agents,” the immigration expert says. The project has a top-down approach: it relies on reference persons and established entities that can communicate with citizens differently and more directly than the local administration. “We are a bit far,” Laredo admits.

Agents on a mission

Agents’ tasks include becoming familiar with the neighbourhood to which they’re assigned, assessing whether awareness actions are necessary, determining how many people can be reached and receiving basic training to carry out the job.

Coaching includes courses on objective data, recurring biases and gender issues. Seminars further contribute to the agents’ preparation, focusing on youth, Islamophobia, media and their treatment of fake news, among other topics. “The agents themselves propose these seminars. They say: ‘I want to know more about this topic, to know to what extent it is true or false’,” Laredo says.

Communication strategies have also become essential at an individual level and for that reason, the council provides residents with the communication tools and resources necessary to deal with their neighbours.

The ‘key guide to anti-rumour communication’  is one of them. In this document, different scenarios are considered, including some in which addressing controversies directly is not advised. It’s about “promoting a dialogue, not a space for crossing accusations,” concludes Laredo. She specifies that some cases might be too sensitive for the anti-rumour agent, so it may be better not to discuss them.

Cultural organisations, older people’s associations and neighbourhood groups have also added their names to this programme. “We have some older women who crochet. They are ‘the crochet moms’. They meet every Monday evening, and their conversations revolve around issues in their neighbourhood. They are women in their 80’s who do not miss an annual meeting,” explains Laredo.

The more visible the presence of the migrant population is for society, the more fears or suspicion it arises.

These women have contributed to the project by sewing the umbrella, the initiative’s logo. Laredo says that they are very active agents since they experience closer contact with Bilbao’s foreign population. Many migrants in Bilbao work in the care sector. A typical profile is a Latin American woman who moves here to look after children or the elderly.

“Older people in this city have a special relationship with residents coming from abroad,” Laredo adds. For this reason, the administration is interested in giving them a role in this initiative, hoping to also foster a generational exchange. Because of Bilbao’s large number of women migrants, gender issues are part of the agents’ training sessions.

Where does prejudice come from?

The council expert explains that many times facts-based information does not change minds. “Prejudice is not rooted in objective information. They are in the emotional part.” That’s why Bilbao’s city council works through a variety of actions: some are focussed on statistics or facts, others address emotional links such as social interaction.

The best way to break stereotypes is by meeting people and talking to them directly and naturally.

“When we begin to know him…he becomes Mohamed, the guy who brings someone’s kids to school. We start to put names, faces, circumstances, and so on,” Laredo explains. 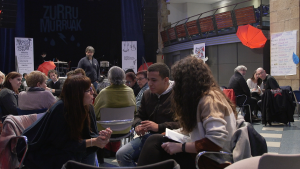 “In my social, personal and professional life, I have realised that the best way to break stereotypes is by meeting people and talking to them directly and naturally,” says Francisco Martinez, a social educator at Aldaika, an association promoting dialogue as a bridge to coexistence, conflict resolution and peace. He states that Latin American migrants might struggle to find a house to rent, but once neighbours meet them, everything changes.

It is about confronting stereotypes, prejudice and rumours.

For Martinez, young people have a key role to play here since in the future they’ll be the ones working with and hiring others. The social educator has helped put in place activities that fostered meetings among the youth of different nationalities. They were young people who live in Bilbao to study, work or look for a better future but whose interests and hobbies are the same as those who were born here.

A video created by this group features three youth talking about what they usually do on their birthdays. That made everyone realise that they share more similarities than differences, says Martinez.

“We try to get the message through any methods that may be helpful,” states Laredo. Writing is one of them.

Prejudices are not rooted in the objective information. They are in the emotional part.

The city council organises anti-rumour creative writing workshops where, apart from teaching the technique, participants introduce the conceptual part and present literary references from other countries. The recognition of migrants in spaces such as culture becomes essential to make them visible — especially for those foreigners who are most active in this dialogue through their own writings or other means.

Comic workshops, quizzes, expositions, story contests, book presentations are some of the cultural activities. For Laredo, “this is another way of telling and another way of reaching.”

Culture has been proved to be able to counter mistrust. Martinez talks about sessions in which youth met to sing or dance together. “The change of thoughts has perhaps been much more effective than the statistics,” he says, adding that people in the groups exchanged phone numbers and realised that they shared an interest in music, technology or others. “They identified with that beyond being someone coming from here or there,” Martinez says.

For the social educator, this becomes essential in situations where they hear fake news or misleading stories: “Even if it’s only because they remember and think ‘Not all of them are like that because I know someone very nice’. There will always be people who do bad things, but they have positive references to counteract.”