No recovery without cities

Mayors from across Europe have urged the European Commission to support a stronger role for cities in the recovery after the Covid crisis.

In a meeting with Valdis Dombrovskis, European Commissioner for the economy, on Wednesday, city leaders stated that they were not or hardly involved by their national governments in how the European recovery budget of €750 billion, called ‘Next Generation EU’, should be used.

Warsaw’s mayor Rafał Trzaskowski said that the Polish government “completely ignores” cities and did not earmark any money for important projects like the development of the metro network in the capital. “National Recovery Plans must include major investment in big cities, without this green growth simply won’t happen,” Trzaskowski wrote on Twitter.

Cities, the engines of recovery

Dombrovskis confirmed that the involvement of cities “will be vital”: “Urban areas are the engines of Europe’s recovery,” he said at the video meeting with the mayors. Cities should “play a major role” and become “a driving force for the green and digital transformations.”

🌇 We need a recovery that will make regions+cities emerge stronger.

They are
👇🏻
✅engines of economy

The European Commission has received 23 of the national plans so far and is currently assessing them, Dombrovskis said. “It appears that local and regional involvement varied a great deal between countries and was limited in some cases.”

The mayors speaking at the meeting reported little or no involvement of their cities in the making of the national recovery plans. They represented cities from nine EU countries, including Spain and Portugal, whose national recovery plans were approved by the Commission on Wednesday. Over the past months, Eurocities had publicly called for better involvement of cities with the campaign #TalkWithCities.

Dombrovskis promised support to the mayors: “You can rely on the Commission to remind member states to make sure of involving the local and regional level throughout the implementation phase.” 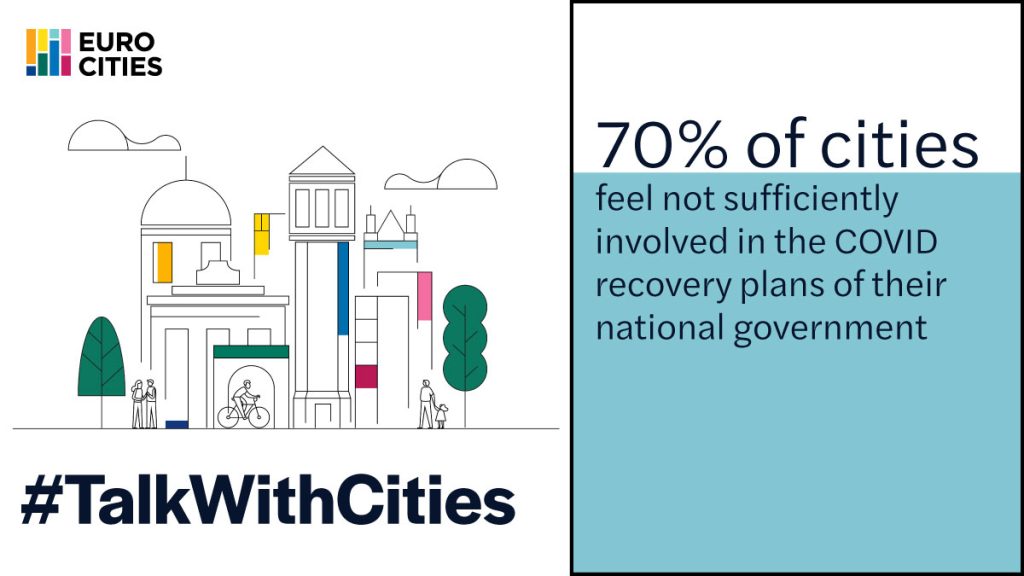 Eurocities: “We need a direct dialogue”

Eurocities, host of the meeting, suggests a “structured dialogue” between the Commission and cities should accompany the implementation to provide urban feedback.

“We need a direct dialogue”, said Eurocities’ president Dario Nardella, Mayor of Florence. He proposed this exchange should be linked with the European Semester, the annual budget coordination cycle within the EU.

Dombrovskis signalled openness to the proposal. He did stress, though, that member states – not cities – were the institutional counterparts of the Commission. “But we want to hear your views to make sure the implementation of the recovery plans is successful.”

Ivo Banek has been a journalist in Bremen, a political spokesman in Hamburg and a communications manager in Stockholm. Working for Eurocities in Brussels now, he can combine his interest in politics with his passion for cities – and chocolate.