Once upon a time, there was a man with a straw hat, pitchfork in hand, looking serenely at his vegetable field, flanked by insects and birds.

A few kilometres from there and a world away, a woman in a suit was ready ‘to mean business’ in a noisy, bustling city where everyone could become someone.

Or so the story goes.

The stereotypical opposition between countryside and city has provided rich inspiration for movies and books. In truth, however, those two worlds have never been as apart from each other as traditionally portrayed.

Fifty per cent of the rural population in the EU lives close to a city, often as part of a wider metropolitan area.

“Many people in urban and rural areas feel an increasing sense of connection. We need to exploit this proximity and work on shared goals,” says Pietro Reviglio, Policy Advisor on Governance at Eurocities.

With the European Union set to reach climate neutrality by 2050, strengthening links rather than differences between urban and rural areas is crucial to achieving environmental goals, adds Reviglio, the author of a 2022 paper on this topic. “If the European Green Deal is to succeed, we need to promote a territorially balanced development across Europe,” he explains.

The European Commission has recently contributed to this conversation: its Rural Vision 2040 sketches a roadmap to develop thriving and connected rural communities thanks to renewed cooperation with cities.

Thanks to this new vision, the urban-rural debate has been gathering strength at both EU and local level.

“Metropolitan areas are integral to and a key stakeholder in developing rural areas within and close to them,” Reviglio said at a recent European Parliament meeting in late June that centred on how the EU and local authorities can support and advance this cooperation.

Facilitated by Eurocities, the event brought together European Parliament members of the URBAN Intergroup – which focuses on urban development – with those from the Rural, Mountainous and Remote Areas & Smart Villages Intergroup (RUMRA), as well as experts and local officials.

City authorities, for example, can export digital and other innovation systems to surrounding rural and mountainous areas to promote development there.

The Italian city of Turin is implementing a ‘Metropolitan Food Strategy’. The scheme creates a short supply chain by using public procurements to purchase locally produced food, and by connecting farmers and consumers at food markets.

In France, since 2015 Grenoble Alpes Metropole has been implementing its own ‘mountain policy’.

The initiative has led to the enlargement of the Metropole from 28 to 49 municipalities, many of which are small and surrounded by mountains.

This territorial expansion enabled the metropolitan government to take a closer look at challenges in mountain territories. A new platform connects the city with surrounding natural areas to develop mutually-beneficial projects.

They include ensuring greater sustainability for the wood industry, promoting tourism, leisure in public spaces, and the joint management of ecological services — which resulted in the cleaning of rivers and other water resources.

The examples of Turin and Grenoble illustrate how municipalities can propel innovation and multiply economic and social opportunities in their surroundings. 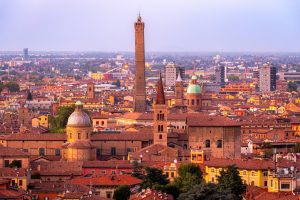 Bologna’s new ambitious scheme further proves this idea. When it took office in 2021, the Italian city’s new administration designed a joint vision for both its urban and rural areas. They include Bologna – with its 400,000 inhabitants – and the larger Bologna Metropolitan area, that boasts 1.2 million residents and a dozen natural parks and reserves.

The local government plans to offer strong support to surrounding mountainous areas to make them more prosperous and resilient, and even out territorial inequalities.

The scheme will hinge on the targeted allocation of EU cohesion and post-pandemic recovery funds, Anna Lisa Boni, Deputy Mayor of Bologna, explained in her speech at the European Parliament’s URBAN–UMRA Intergroup meeting.

The €1.2 billion from the EU-funded National Recovery and Resilience Plans (NRRPs) assigned to the Bologna Metropolitan area will be devoted to fighting climate change and social inequalities, revitalising the economy, delivering a just transition, and fostering technological development.

The local government has already conducted a mapping of the metropolitan territory to understand where NRPPs funds could be best used, said Boni, who previously served as Secretary General of Eurocities.

The decision on the funds’ distribution came in coordination with mayors of the metropolitan areas, Boni explained.

To ensure a balanced and widespread development across  wider Bologna, “we created joint departments and one-stop shops dedicated to tourism, energy and economic development to ensure that no one is left behind,” the Bologna Deputy Mayor explained.

A few days after the European Parliament meeting, the debate on strengthening rural and urban links continued at the World Urban Forum in Katowice on 26-30 June.

At the international UN-sponsored gathering, Eurocities led a networking session on how rural partnerships can promote a green transition in Europe.

Reviglio, along with EU and local officials, discussed municipalities’ role in promoting the Green Deal beyond their boundaries, how to elicit rural-urban exchanges, and seize opportunities together.

For a practical example about the benefits of a city-rural alliance, look no further than the past two years.

A recent study by the ESPON group on the territorial impact of the coronavirus pandemic, suggests that the crisis could be more easily kept under control in locations with a well-structured metropolitan cooperation.

Municipalities that offered a coordinated and targeted response to their surrounded areas delivered better critical public services, which helped minimise the impact on citizens’ lives.