Models of diversity and inclusion

Barcelona, Bologna, Bilbao, Ghent, Gothenburg, Leuven and Mannheim are the cities with above 50,000 inhabitants finalists for the European Capitals of Inclusion and Diversity Awards.

The seven Eurocities members stand out for fostering an environment of inclusion in respect of racial or ethnic origin, sexuality, gender, religion, disability, or age. Leuven and Gothenburg are also shortlisted as local authorities fostering Roma inclusion.

Bologna’s history with diversity goes all the way back to the Middle Ages when the university started attracting large numbers of students from all over Europe. “This pushed Bologna to value diversity, dialogue and inclusion as key features for its social, cultural and economic development,” the council told Eurocities.

A bit later in history, at the beginning of the Modern Ages, and some kilometres north, Mannheim was founded. “Mannheim has been a city of immigration since its foundation in 1607,” state Angela Wendt and Gerhard Fontagnier, City Councilors of the Green Party Parliamentary Group and Spokespersons for Integration, Migration and Refugees.

Nowadays, 46% of Mannheim’s residents are migrants or children with a migrant background representing up to 170 different countries. The German city is an example of superdiversity, a term coined by sociologist Steven Vertovec that indicates levels of population heterogeneity significantly increasing, not only between minority groups but also within them.

For real incorporation of such diversity into society, the Mannheim Alliance for Living Together in Diversity was born as an institutional and intersectional network that comprises 342 institutions from civil society, business, politics, and the administration. This alliance developed the ‘Mannheim Declaration for Living Together in Diversity’ with institutional representatives of all groups affected by discrimination.

Bilbao did something similar when creating a space of analysis, dialogue, reflection and collaborative work between institutions, social and cultural entities, companies, the media, educational centres and citizens. Altogether, they elaborated the Charter of Values of the Bilbao City Council to protect everyone’s rights.

Likewise, the Local Action Plan for the human rights of new citizens was approved in 2018 in Bologna after a participative process with migrant organisations. It aims to protect the human rights of migrants, but also orients the administrative action and prevents or removes barriers to accessing services. The plan contains objectives and actions in three policy areas to be applied both internally, within the city council, and externally: participation, non-discrimination, and wellbeing.

The city of Leuven supports organisations that work with vulnerable people financially and captures their input structurally to involve a variety of audiences in the decision-making process. “It is our conviction that the reality of a city arises from the dynamism between the local government, organisations and citizens,” the council told Eurocities.

In Gothenburg elected representatives talk to the civil society to build collaborative councils. Five specialised boards – LGBTQ+, pensioners, Roma, Swedish-Finns, and disability – provide input on legislation that impacts them. The members belong to the group at risk of discrimination that they represent.

The mayor of Gothenburg, Axel Josefson has welcomed the nomination and added that it “cements our commitment to ensure that Gothenburg remains open to the world while providing equal opportunity for a good life to all who choose to call our city home.” Proof can be found in the Equal City programme, which analyses demographic and socio-economic data to identify groups at risk of structural and individual discrimination.

Barcelona’s key to inclusion is also incorporating interested groups but combines it with a permanent drive for innovation and a gender perspective. According to the municipality, this guarantees policies’ quality. It also ensures that the policy responds to citizens’ specific needs and that it survives over time no matter the local political changes.

“Barcelona is a Mediterranean city located in a place where cultures have historically merged, and this mestizo character is part of its DNA. Diversity is not an issue to manage, but a wealth, a constitutive element of society,” the council told Eurocities.

Barcelona’s long trajectory in tackling inequalities materialises in the Office for Non-Discrimination. The office works to raise public awareness and advises those who have suffered any discrimination.

It’s essential for cities to know the issue inside out before they can act on it. So Bologna uses data to identify inequalities. The Statistics Department collects, processes and disseminates gender-disaggregated information – information that is collected and analysed separately depending on gender. It also manages a specific database on migrants and produced a vulnerability map. All this work is at the base of Bologna’s intersectional approach.

Bologna is the first Italian city to use gender-disaggregated data in all its reports and publishes a yearly Gender Balance report. The municipality produces a yearly Positive Action Plan that foresees diversity management actions related to gender, disability, age and sexual orientation. The Plan includes a Code of Conduct for those employed by the administration, punishing discrimination on any ground.

For its part, Ghent was one of the first cities in Europe to detect discrimination in the labour and housing market through situational testing. The proportion of real estate agents discriminating against candidate tenants on the grounds of origin decreased structurally from 26% to 14%.

In preparing and implementing anti-discrimination policies, Ghent involves inclusion experts. “As a city council, we are the driving force, and we always do this together with our people: with experienced experts,” states Astrid De Bruycker, Ghent Alderwoman for Equal Opportunities.

However, the involvement of inhabitants becomes essential to react to injustices. One of the projects that stands out in Ghent is the Bystander training. Knowing that 86% of children who experience sexual harassment in public do not get help from bystanders, Ghent organises training to react to inappropriate behaviour. Citizens, social organisations, schools, sports clubs, and pubs are some of the attendants.

Through a partnership with the police, the Public Prosecutor, the Interfederal Centre for Equal Opportunities (UNIA) and the LGBTQIA+ community, the Flemish city also makes sure hate crimes have no place.

“Our nomination is a strong indicator that we are progressing in the right direction. This keeps us motivated to continue taking steps forward,” says Astrid De Bruycker, Ghent Alderwoman for Equal Opportunities.

Equality is one of the pillars in Barcelona. The proof is the LGTBI centre that, together with other entities, has launched a protocol for instances of LGTBIphobia. Moreover, to avoid discrimination from the earliest ages, the municipality has created the Network of Schools for Equality.

Preschools are also in the spotlight in Gothenburg. ‘Rainbow families’ can enjoy tailored activities that facilitate safe spaces to meet and interact, and all kindergarten staff have undergone special training focusing on stigma and normalisation.

Similarly, though in a more holistic way, Bologna’s Education Department runs resources and training for teachers and schools. It also offers workshops on dealing with inter-cultural issues, racism, misogyny and gender stereotypes, and LGBTIQ rights. A participatory process with 14 local LGBTIQ organizations resulted in the commitment to supporting 52 actions in the fields of sport, culture, services and education.

Mannheim highlighted intersectional discrimination by launching the study ‘Homosexuality and Islam: being LGBT+ and Muslim?!’ whereas Bilbao has a protocol to detect discriminatory attitudes that pinpoints behaviours, indicators and procedures for police action.

Unfortunately, migrants have to face stigma and misinformation wherever they go. To dismantle fake news and stereotypes for a healthy coexistence, Bilbao makes long-term investments through the Antirumours Strategy involving more than 400 people and related entities. 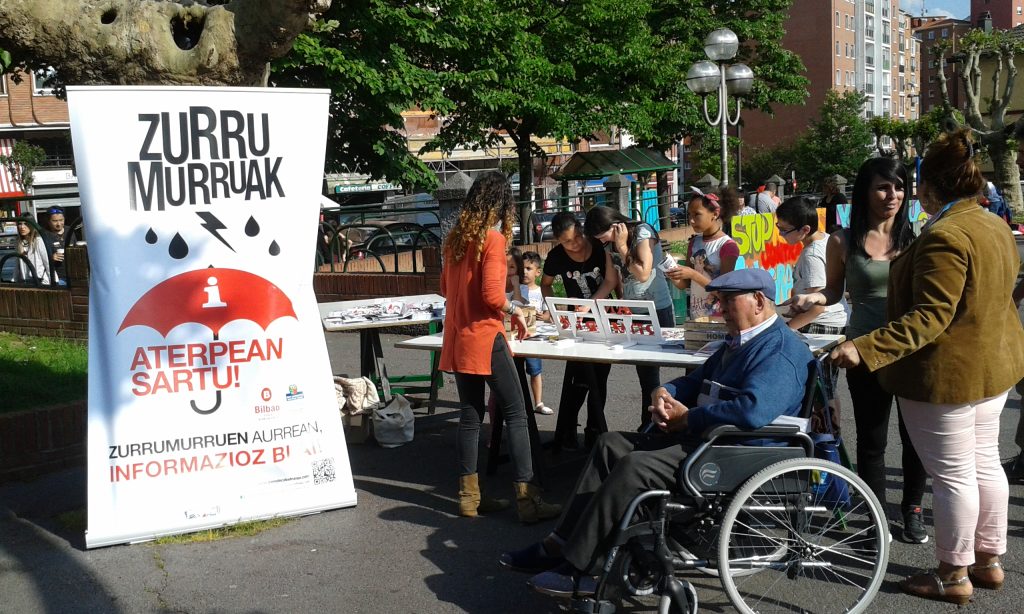 Religious diversity also plays a role in peaceful coexistence. That’s why the municipality created the Table to participate in Religious Diversity, a forum for dialogue between local political representatives and the different religious confessions present in the city.

And to encourage and highlight foreigners’ public participation, the Local Council of Immigration was born. “In Bilbao,” says Itziar Urtasun, Councilor for Cooperation and Coexistence at the Bilbao City Council, “we want a city for all people. We work to maintain and improve the high level of coexistence and civic values that we enjoy. This candidacy encourages us to continue in this work firmly and decisively.”

Two of the main credos of Leuven City Council is to “connect rather than divide” in a city where “it doesn’t matter what your background is but what your future is.” Leuven has decolonised public space in a participative way and pursues a discrimination-free city through the projects ‘Leuven Without Racism’ and ‘Queer Leuven’.

However, De Bruycker adds that “we still have a long way to go until everyone accepts each other for who they are – without struggle, discrimination and harassment.”

Ghent ensures migrant integration by pairing newcomers with local buddies in the project ‘Samen Gentenaar’. Migrants can settle, practice the language and learn about their surroundings.

Some communities do not have to be newcomers to face discrimination. That’s the case with Roma people. The Romano Center in the West is an institution managed by the Gothenburg city council that functions as an information and citizens’ office dedicated to this minority. The Roma community can be assisted with work, education, social services, health care and housing, as well as participating in society fully.

The position of Disability Ombudsman was created to enhance the effectiveness of Gothenburg’s work to improve living conditions and increase the participation of people with disabilities. The Ombudsman identifies shortcomings and proposes measures to combat discrimination.

The city of Ghent annually budgets for adequate transport addressed to those living with reduced mobility or low income. With this budget, 113,825 taxi checks are bought so that the targeted group of Ghentians can take one at a reduced rate. An adapted approach will be embedded in an integrated policy to tackle transport poverty based on the lessons learned.

Policies of integration addressed to other groups such as homeless people, the elderly, the youth or children are also widely incorporated into the municipalities’ strategies mentioned above and considered for the final decision of the jury.

For Wolfgang Taubert, City Councilor of the Mannheim Liberal Party Parliamentary Group and Spokesperson for Integration, Migration and Refugees, “the nomination is an honour as well as an obligation to continue to be a peaceful and prosperous city that values the chances of a diverse community.”

“It’s an acknowledgement of the efforts and decisiveness that we have shown as a city council,” adds Leuven city council. “Furthermore, it’s a testament to the variety of citizens and organisations that have supported us and have been supported by us in pursuing these goals.”

Bologna’s view is an example of commitment beyond recognition. “Even when the national cultural and political context has been less favourable to inclusion and even when promoting diversity was controversial, the Municipality of Bologna has maintained its views and engagement,” the council said.

What is clear is that all the finalists are committed to inclusion and diversity. Regardless of the competition results, their inhabitants will continue to enjoy the development of integration, equality and social inclusion policies.

The winner cities will be announced at the Inclusion and Diversity Awards ceremony on 28 April, which will kick off the month of May, European Diversity Month.