The seed of innovation

For a week, drinking a beer on a sunny terrace while learning about active ageing, artificial intelligence, bio products or quantum physics sounds like a plan in Donostia-San Sebastian, Spain.

“We are well known for tourism and gastronomy, but in the last 20 years, the city has undergone a significant change,” explains Xabier Hualde, Innovation and European project Officer at Fomento San Sebastian, the municipal Innovation Agency. “Donostia has made a great effort in investments and attracting talent to both position itself as an innovative pole and make innovation the economic development model of the city.”

Hualde and his team organise the innovation week every year to plant the seed of creativity and technology in the citizens’ minds.

“The Innovation Week is a space in which we bring closer and give visibility to the work of innovation and science in the city,” says Hualde.

“One of the handicaps we have is that people work, have schedules, home chores. People have a life. Stopping a city for a week is complicated,” explains Hualde. “That is why we look for creative and different formats with attractive themes.”

During seven days, around 50 activities welcome more than 5,000 attendants, including curious citizens and scientific companies’ employees. International experts in the field also come over to share their knowledge with a broader audience.

A movie about quantum physics was one of the activities that promoted science and technological learning last year. After watching it, experts in the field commented on it, answered questions from the audience and explained the most exciting concepts. Two professionals on artificial intelligence and the CEO of a quantum company shared a roundtable after another film about machine learning.

The municipality also encourages business innovation by acknowledging their effort and success. The proof is the awards to the most innovative companies during innovation week. Entrepreneurs, companies and tech centres are the targets of technical workshops in fields as creative and diverse as biosciences, artificial intelligence, business management, and global trends.

Tech for the future

During Innovation Week, several workshops such as on programming and robotic sessions mainly target young people with the help of specialised centres and universities. Moreover, youngsters can present designs for the city of the future.

Another proof of Donostia’s willingness to include innovation at an early age is the fact that the city was one of the winners of the Eurocities Awards 2022. Future generations transforming the cities’ Donostia-San Sebastian won with its Innovation challenge – in which young people between 14 and 25 work together to solve urban demands.

Hualde explains that “our young people, especially in small cities such as ours, perceive cutting-edge research elsewhere  —in Silicon Valley, Germany, or England. These actions show that there are job opportunities in leading sectors here.”

Donostia intends to awaken young people’s technical and scientific vocation, particularly young girls. “They will be our tomorrow workers. Many are going to leave, but we want to have programs to offer those who stay and those who return,” adds Hualde. 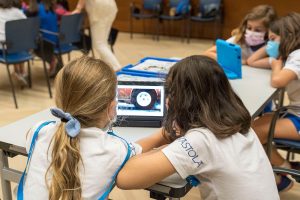 In 2022, the innovation week focuses on success stories, starting by how a small city of fewer than 200,000 inhabitants has got, in 20 years, 29 research centres and 4,500 researchers, infrastructures, and work on many domains even at an international level.

The council also works with companies and technology centres to encourage forgotten fields of investigation. The truth is the pandemic has helped make the need for science visible, and municipalities such as Donostia have supported it with an economic effort.

Indeed, according to Hualde, people are not yet aware of how important technology and innovation are, but “little by little, we are sowing the seeds so that people begin to think or perceive science and innovation as essential elements.” San Sebastián promotes innovation as a social and economic model of the city.

The innovation week is one of those seeds.