Oto Pestner’s music may be frivolous and cheerful, but it is certainly not trash – so how did ‘Letiva,’ the 1978 hit of this dancehall darling, become the anthem of Ljubljana’s anti-waste campaign? When the people of Ljubljana awoke one morning to find Pestner’s face plastered all over the city, and the morning radio playing his old hits, people were confused at first – had the intervening decades been a dream? 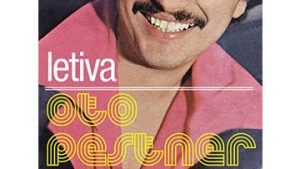 But no, it soon came out that Snaga, the city’s public waste company, was using him to send out a message: The old stuff can be just as good as the new, so don’t just throw things away – rethink, reuse, recycle. “We reused my old song for this campaign and it instantly became a re-hit!” Pestner exclaimed during a radio interview about the campaign.

From a situation where all waste was going to landfill two decades ago, Ljubljana is on track to recycle 75% of its waste by 2025. However, to recycle waste efficiently, it needs to be separated in people’s homes. The Oto Pestner campaign was just one of many tactics that the city used to make its residents take notice and help it to become the EU capital with the largest share of separately collected waste.

The hit song ‘Letiva’ was not the only thing to come back to life – the rubbish bins themselves suddenly became a lot more animated. Groups of angry bins stormed the streets with pickets and banners to let people know that they were ‘fed-up’ with food waste. For months they could be found in the city centre, parks, public markets and community events. One bin even had a television debut with its modern ballad, ‘Garbage Bin Blues.’

And of course no campaign would be complete without its own rap, and a special seasonal Halloween series pointing out how frightening rubbish can be. Not only was this campaign fun, it was also extremely effective. So much so that the city has already hit a recycling rate of 70%, only five percent away from its 2025 target.

It is not, however, enough to just communicate with people. Communication is one of four pillars that Ljubljana considers essential to its success so far. The other three are good services and infrastructure, appropriate legislation and political will. Ljubljana explained this approach to visiting cities during a European Green Capital Network event that it hosted on its progressive waste policy in November.

If you want people to use a service in a certain way, you have to design it in such a way that it is possible, and even easy, to do so. In 2003, Ljubljana began to collect different types of waste separately, in 2006 it began biowaste collection at people’s doorsteps.

In 2012, after testing the system in the suburb of Brezovica and finding that paper recycling tripled in a couple of months, the city rolled out door-to-door paper collection. In 2013, the city made a big push, lowering the frequency of collection for general waste to encourage people to separate more, building 67 underground collection units, and replacing almost 9,000 bins on the street with ones marked for separate waste.

Getting the legislation right means being ahead of the curve. Ljubljana has already implemented stricter legislation around waste than that which exists at the moment in the EU. This covers obligations for the city, the citizens and the public company responsible for waste, and is reviewed every five years. Bringing your ambitions into law is the only way to ensure that all of the different stakeholders and departments get into line with the city’s vision.

Meanwhile, securing the political will to achieve this requires providing good evidence of a working strategy, and of the need for change. This circles back to communication, because politicians, as the public voice of the people, must be sure that people are or will be in support of new measures. The communication campaign that converted people, many of whom were initially resistant to the new system, also helped to convert politicians.

The mantra of rethink, reuse, recycle, is a hierarchical list. Rethinking is the most important because deciding to be more careful about what you buy, purchasing second hand if possible, or refraining from unnecessary purchases altogether is the best and most energy efficient method of preventing waste.

Recycling is the least energy efficient, because a lot of work goes in to identifying recyclable material, melting it down, giving it a new form and shipping it to where it can be used, and a lot is lost in that process. Another part of Ljubljana’s strategy has therefore been to support social enterprises that reuse old things and give them a new life.

Smetumet is one such enterprise: The city gives them funding, space to work and other opportunities for their mission to upcycle waste into beautiful products. “You’d be surprised how easy it is to make waste out of waste.” Maja Rijavec, cofounder of Smetumet, says sardonically. Her point is that it takes skill and creativity to take what others discard and produce something that people actually want to buy.

Smetumet take material that is not commercially recyclable, like tarp, and turn it into products like indestructible bags that come with a lifetime guarantee. They also produce souvenirs for tourists, like a felt dragon’s egg filled with earth and chilli seeds. “When the egg hatches” says Maja, “it gives you dragon’s breath.” Commercial sales make up 70% of the company’s income. They also run workshops where they teach groups about the value of upcycling and give people a chance to make something of their own.

Another upcycling best practice from Ljubljana is the Repair Café. The city brings residual waste to the café and the designers working there pick out things that they see potential in. An old bath, for example might become a high-concept drawing-room set of a sofa and chairs. People who have things like toasters that break can also bring them to the café and learn how to repair them.

The Centre Ponovne Uporabe Ljubljana, where the café is based, also takes things that could find another life without being altered: everything from dinner plates to ice-skates is cleaned up and put on the shelves. Getting people comfortable with such products requires a psychological shift, explains Simona Berden, a senior adviser at the City of Ljubljana, “A woman said to me, ‘I just don’t feel right eating from a plate that another family has used before.’ I asked her if she had ever eaten at a restaurant, ‘Yes,’ she said, and I said ‘And do you think they buy the plates and cutlery new for each meal?’ Well, her jaw dropped – that had never occurred to her before.”

To avoid packaging waste, the centre also boasts a self-service vending machine, where people can bring their own cartons to fill up with everything from cooking oil to shampoo. This machine has been so popular that it now has a twin operating in the city’s central market square. Like Smetumet, the city supports this enterprise not only with waste, but with space, grant funding, and advertisement.

It is thanks to this enormous push on all fronts that less than 5% of waste in Ljubljana ends up in landfill. The city’s tremendous achievements in changing attitudes, behaviours and systems helped it become European Green Capital in 2016, earning flags that still fly from public buildings today. There was a lot of push-back at first, but residents are now very proud of their green reputation and are working hard to uphold it.

Only Maja from the upcycling company Smetumet expresses some wry reticence; All of this awareness about waste, she says, means that they may one day run out of material for upcycling “We are officially putting ourselves out of business.”

Anthony Colclough is a storyteller whose writing and audio-visual work take up human themes from sport and law, to cultural memory and stolen hearts, to the lives of cities and lives in cities.