How high-tech feedback is getting rid of bureaucracy

Winters in Helsinki are often very similar: Snow, bitter cold and darkness. But Jenni Talasmo says the winter of 2018 was different for her. “2018 was my first winter in customer service,” says the employee of the city’s Urban Environment division. “It was a surprise how much people called us.” Her division was inundated by thousands of Helsinkians demanding that a snowplough clear their street. “I thought, okay, we are still in Finland and winter shouldn’t be any surprise, but it was,” says Talasmo. “I was confused.”

The Finnish capital prides itself on its feedback system, but the winter of 2018 showed that the feedback they were getting was too much of a good thing. “We have a positive problem,” says Marjatta Peltonen, project manager of the city’s feedback renewal programme. “We get more feedback from citizens and this challenges the digital systems we have.”

That’s why Helsinki has embarked upon a programme to modernise the way its inhabitants give feedback. As part of its digitalisation strategy, the city is looking to create a modern-day feedback drop-box that is transparent and inspired by people’s desire for fast and clear customer service, Silicon Valley-style.

The system would automate some feedback systems to enable city employees to spend more time dealing with people’s concerns. For example, process automation and artificial intelligence will take over the routing of feedback to make sure the right city employee gets a person’s comment with just the tap of a smartphone screen. “The aim in this renewal is to make the process of the feedback, complaints and messages that we get easier,” Peltonen says.

And in a world where private companies are offering seamless, AI-driven digital services, Helsinki believes that a city that fails to match this pace will lose its inhabitants’ confidence.

“Customer’s needs and citizens’ needs are constantly evolving, and we need to develop the services constantly to keep the trust,” says Peltonen. “Maybe we’re not even at the point where we have lost the citizens’ trust, but to keep their trust we must listen to them and involve them from the beginning when we’re planning new services.”

But if being able to compete with Amazon and Google on the tech front is a plus, making sure there is clear communication between people and the city is crucial. “What’s important is that they will get an update when we’ve reacted to the message,” says Peltonen. “If there’s a broken traffic sign, they’ll get an update when it’s repaired and might get a picture of it, so that they actually see that the city reacts to their needs and their ideas and that they don’t just disappear somewhere.”

This transparency will be a key part of the improved feedback system, which Peltonen hopes will be fully implemented by the end of next year. Within the limits of data protection, the city aspires to publicly post online as much feedback it receives as possible.

Comments already published on the city’s website paint a picture of citizens’ everyday concerns. “A tree fell during a storm, could you please remove it?” one says, with a map providing the customer service officer with a location in the northern suburb of Torpparinmäki. Another person gives praise: “Thank you for the two new trampolines in the Oulunkyläntie playground!” Both pieces of feedback are treated equally by the city, given a personalised response, and a digital paper trail allows citizens to see the progress of their enquiry.

“If you want to involve residents and customers in the planning of the city, I think it’s very important that residents can give feedback to us. I think it increases trust between residents and city officials,” says Tarja Posti, head of the Customer Service Unit of the Urban Environment division, which receives the bulk of “smaller” feedback around issues such as parking permits, overflowing bins, park benches and road repairs. 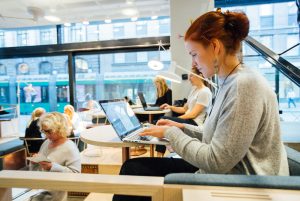 Helsinki hopes to build this trust on the back of both technology and training. Using text-analysing algorithms that looks at the content but also the tone of feedback, the city hopes to slim down the process but also gather useful insights from the feedback data.

Despite this, the machines cannot serve all the customers’ needs. “They need a human to talk with,” says Posti. That’s why the renewal programme will also focus on training of the city’s 2,000 civil servants responding to feedback. “If the city staff don’t write well-articulated responses to the citizens’ feedback, the digital platform fails in making interaction easy,” adds Peltonen.

Employees, often from domains that aren’t communication-based such as service workers, doctors and engineers, will be given support on guidelines for communicating with Helsinki’s inhabitants, even in stressful situations like an extra-snowy winter. Peltonen says: “Every response to feedback either builds or diminishes trust between the citizens and the city. As a citizen, you either get the feeling that your complaint or suggestion has been understood and is taken into consideration, or you don’t.”

Renewal needed now more than ever 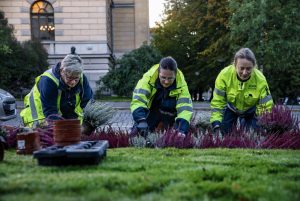 With the arrival of COVID-19, the importance of this interaction has only increased. “We got a lot more feedback,” says Talasmo. “Suggestions where they would like more benches or rubbish bins, this sort of thing.” Posti suggests people’s increased interaction with the city came at a time when movement was restricted: “The summer was warm, and people didn’t have anything else to do other than going outside and walking in parks, so we got a lot of feedback.”

But another challenge revealed by the pandemic was the need to support those who aren’t usually online. “It made the employees working in customer service realise that it will be a growing part of their work to give support in using digital services,” says Peltonen. “And as our services are becoming increasingly digital, the need for support is growing all the time. We still have approximately 10% of Finnish people that don’t use internet at all, so there’s no way we would get rid of other services.”

Overall, the feedback renewal scheme revolves around giving city officials the digital tools to deal with the demands of citizens in the 21st century. Peltonen points out that, paradoxically, more tech will mean more human interaction. “Providing civil servants with advanced digital tools that reduce manual tasks gives them more time for interaction and co-creation with the citizens,” she says. “Trust-building in a city is more of a co-creating community than a bureaucracy.”

Fraser Moore is a copywriter and editor at Eurocities.