The beats of a butterfly’s wings on the evening air could create a tornado hundreds of miles away. So postulates chaos theory, but in a realm far away from science, where a butterfly is much more a symbol of peace, and of healthy urban living, butterflies abound in Utrecht’s Máximapark.

Why hundreds of butterflies should be found in an urban park is itself a result of a great symbiosis; the moulding of talent from the city administration and of passion from Utrecht’s citizens.

The Máximapark is almost the size of New York’s Central Park, but in a city of around 350,000 people it’s perhaps even more central to people’s hearts.

Throughout the Netherlands, even, the Máximapark has been considered the nation’s favourite urban green space, and, through the COVID-19 pandemic, it continues to be a place where communities can come together.

A place of connection, identity and pride

The park is located in a newer part of the city, the Leidsche Rijn district. This is special, says Noortje Voulon, City District Advisor for Utrecht, because “normally when you build a city you might start around a church or a square”. When the Leidsche Rijn district was conceived there was already a green belt between the city and outlying villages, which has now been developed into the park. In fact, says Voulon, the community of Leidsche Rijn has rather “been built around the park.”

The community of Leidsche Rijn has rather “been built around the park.”

“That’s true. It’s a real meeting place,” adds Louke Vissers, City District Manager for Utrecht, “and that was not initially the case, but now it functions like that. Now all people, old people, young people, people from the older villages and from the new parts of town come together. It’s a great instrument for community building.”

“The commitment from the inhabitants of the district is great because these people are pioneers in a new area. That’s why it did not take a lot of effort to get people involved”, says Vissers.

Indeed, while the park might have originally been conceived as a green lung for a growing city, it’s now a hub for myriad activities. “Mothers of newborn babies can come together in the Anafora restaurant. Yearly cultural and musical festivals are being organised by citizens, and all kinds of sport groups exist. Not only formalised sporting groups, but also a lot of yoga groups and others, like calisthenics,” explains Vissers.

Voulon and Vissers work to stimulate citizen engagement. The Parkberaad (park council) is a unique model that sees the municipality and volunteers working together, with equal say in the decision making, to make the park even better. In turn, this has led to some unique developments.

The Parkberaad (park council) is a unique model that sees the municipality and volunteers working together, with equal say in the decision making.

There are a lot of different groups of volunteers working in and for the park. One group of more active volunteers, ‘the friends of the park,’ have already been pivotal in the park’s development for over 15 years.

“They have a lot of contacts” says Vissers. “When we planned to install bridges in the park, a social entrepreneur working with handicapped people was contacted to help deliver all the bridges.” 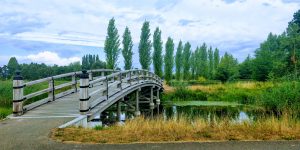 “When the grounds of the Dom Cathedral in Utrecht city were to be renovated,” says Vissers, “the friends of the park stepped in to save the ancient trees, which are now in the park. In the roots of these trees there are preserved ancient Roman archaeological remnants, which are now transported with the trees to the newer part of the city. That’s a nice connection with the city.”

And, of course, every week around 50 volunteers come to work in the butterfly garden, which was another initiative of some of the park’s volunteers, after they contacted Piet Oudolf, famous for the High Line in New York.

Encircled by a car-free ‘ribbon’ of asphalt, that is widely used for many different activities, from walking and cycling to running and skating, it is clear when you are entering the park.

Within the park, several zones demarcate the uses of different areas. “It has sports, an ecological zone and a zone for recreation. Also, playgrounds and picnic areas” says Vissers.

And so too, the volunteers who team up with city representatives on the park council, work in specific areas, such as communications, events or project development, and green maintenance. 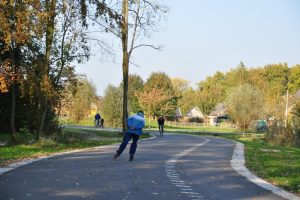 The basic principle is one civil servant and one volunteer work together on a specific subject, to represent both the city of Utrecht and the citizens and volunteers, when advising and initiating in the park.

“We’re currently working on a meeting centre, which is not something we planned as a municipality, but we have volunteers who are able to work through project developments such as these. All volunteers bring different qualities and expertise to the table”, says Vissers of how the partnerships work, each of which focuses on their given subject with the support of a working group comprised of further council staff and volunteers.

The volunteers are even available for members of the public who may want to initiate certain activities, be it setting up a music or food truck festival, hosting a barbeque, organising a marathon, or cultural events, and they can advise on how and where this can be done. 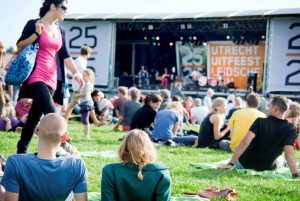 During the COVID-19 pandemic, this sense of space was very useful – the park stayed open and social distancing was easy. Chalk circles on the fields gave a visual indication of social distancing requirements and the wide asphalt ribbon made it easy.

A foot in the past, sights in the future

In building a sense of community, the park has also been designed with a sense of history.

“There is a museum housing several archaeological findings from the Leidsche Rijn district and the Máximapark,” says Voulon. “They found, for example a Roman ship.”

The tributary of the Rhine, which flows through the park has also been reset to its Viking era course. “So, even though the park is only 20 years old, it’s still developing, and it has a sense of history of the whole area,” says Voulon.

Nonetheless, as new ideas and new needs emerge, the park is constantly evolving. With such a dynamic and dedicated team of volunteers and city council staff behind it, the park’s future looks secure.

It’s clearly a place that is special, not only in the hearts of 100,00 people in the Leidsche Rijn district, and wider city, but, let’s not forget, also for the butterflies.