Donostia/San Sebastian – Smart from the bottom up

Many who begin the ancient pilgrimage of the Camino de Santiago in the city of Donostia/San Sebastian will be unaware of a certain irony embodied by the historic district from which they are setting off. Settled over 2,000 years ago, this historic quarter is home to one of the most innovative technological and participatory projects in Europe. Those walking through the pedestrian Calle Mayor street at night may notice that the LED lampposts lining the street are equipped with motion sensors allowing them to use less energy by dimming after people pass by. But would they ever suspect that, in addition to this, that tracking and counting sensors are tallying their movement through the streets and into the homely little shops? That climate sensors are giving a minute-by-minute read of the weather, or that wide scale data aggregation is creating enormous repositories of new cross-referenced information.

This may be beginning to sound like some sort of technocratic dystopia, but it is far from that. There are no secrets here: All of the data that is collected is published on the SmartKalea website, and is used to help local shopkeepers improve their businesses, and local creative and tech companies come up with innovative new ideas for cities all over Europe. The ultimate goal of this system? To combat global climate change by reducing energy demand, street by street.

“It all started on a trip to Amsterdam,” remembers Nora Mendoza of Fomento de San Sebastian, the Economic Development Department of the city, “we were there for a knowledge exchange visit, and we saw this ‘climate street’. We were inspired and we thought, maybe we can design an adapted and improved project in our own city.” The model they ended up coming up with is one that has now spread across the city, and to other cities in Spain and abroad. The idea was to establish an active public-private collaboration model that integrates entities coexisting in a city environment from a smart and sustainable perspective: Residents, shops, technology companies, and other businesses and an array of municipal departments.

We started working with shops, bars restaurants, and the citizens there

“We started off by choosing one street, Calle Mayor, which is an emblematic pedestrian street in the old part of the city,” Nora says. “We started working with shops, bars restaurants, and the citizens there, giving them advice in the use of electricity.” The city combined a sustainable and a business approach: They gave shop owners advice about how they could cut their energy use, installing some metres to help them follow and reduce their consumption, along with data and other gadgets that could improve their business.

“Some of it was just basic things like changing their lighting,” Nora explains, “but we also worked with them to analyse their business overall and come up with good ideas that would deliver really short returns, as short as two years, or some things they could do that didn’t require any investment at all.” They immediately began to see good results, and more and more people wanted to get on board. Among the shops that had joined the project, users grouped together to buy 100% renewable electrical energy, getting lower rates and being more environmentally sustainable.

“Some people are afraid or confused by technology, so we gave them training in how to use innovative technology to improve their competitiveness. We combine sessions where everyone could join, and smaller ones that were one-on-one, where we could adapt and propose specific solutions for them.”

A big part of it was also giving people access to the data. “When we showed people how to access the data from the people counting sensors on the street, they could use the information to, for example, see how well a new promotional campaign was working for them – were more people stopping outside, coming in, and buying things? They could also track how many people were on the street compared to the number that were coming into their shops,” Nora says.

They realised that they were missing a good part of the day!

—
These new data insights spurred on some changes. Nora remembers a shop dedicated to mountain sports for more than 50 years that closed for lunch for two hours every day. “That’s common here, shops usually close from 14.00-16.00. But with this counting system, when they saw how many people were passing their doors during these hours, they realised that they were missing a good part of the day! It’s a sports clothes shop, so it’s the perfect place for pilgrims who need to stock up before their journey, but pilgrims were walking past while the doors were closed. When they saw this, they decided to make a change and keep their doors open.”

As mentioned above, all of this data is stored and combined on the SmartKalea website, where it is open and available to all. Other available data is also cross-referenced with it, such as the occurrence of the city’s famous cinema festival, so that they can get a picture of how events like this, or other factors, influence the numbers. “The data is always recent – it’s continually updated. And people are getting used to this now. They want to be able to measure more things, have access to more information.”

Thanks to the success of the initial pilot, the work being done in this one street has been expanded to encompass the whole historic district of the city, and has expanded to other neighbourhoods. “We are involving more citizens, more shops, more local companies.” Several municipal departments are involved, and each of them funds different parts of the measures. The regional authority was also so impressed with the initial results that it decided to get in on funding the project too. 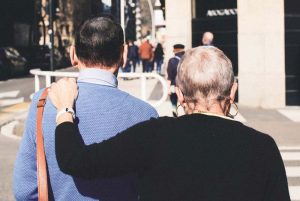 “It’s a collaborative model, working with people, businesses, with other departments and levels of government. And it’s been recognised and awarded several times, for example for the best public/private collaboration project.” Nora speaks of the attention that the project has gained: “We get many visits, people from other cities or from international companies, who want to learn deeper about SmartKalea. We bring them to the street, talk to the shop owners, and give local companies a chance to showcase their technologies, fostering new business opportunities for companies and technological collaborators.”

Nora sees a bright future for SmartKalea, and for the projects that have been inspired by it. In the coming days, yet another street from the city will become part of SmartKalea, and its shops and residents will become part of SmartKalea community. SmartKalea requires a high level of coordination and integration on a small scale, which can then be scaled up gradually to the rest of the city. Thanks to the initial experience, replicating the project in other neighbourhoods can save energy even more rapidly.

Anthony Colclough is a storyteller whose writing and audio-visual work take up human themes from sport and law, to cultural memory and stolen hearts, to the lives of cities and lives in cities.