Will Euro 7 help clear the air?

Hitting at the heart of air pollution is crucial for the European Union to achieve its Green Deal environmental goals.

The Commission’s much-awaited Euro 7 legislation is one of the building blocks of this strategy. The new rules are slated to impose emissions standards that will target road transport, one of the main sources of air pollution.

With anticipation building ahead of the Euro 7 announcement in 2022, on 3 December Eurocities moderated a conversation among EU and local officials, transport and consumer representatives to discuss what crucial elements would need to be included in the new  regulation.

Many hope Euro 7 will speed up the elimination of vehicle air pollutants from roads in the EU, marking a turning point for residents’ lives.

“We should consider air quality as a basic consumer right,” said Robin Loos, a Sustainable Transport Officer at the European Consumers Organisation BEUC.

Panagiota Dilara, who is leading the EU Commission team in charge of drafting the Euro 7 proposal, agreed.

“We need to make sure that the legislation that we are putting together safeguards clean air and the health of the citizens while, on the other hand, providing a stable and clear regulatory framework for the industry, combined with a good compliance mechanism,” said Dilara, Team Leader of Clean Vehicles at DG GROW, the department for internal market, industry, entrepreneurship and small businesses at the EU Commission.

Every year, 400,000 people in Europe die a premature death because of the air they breathe, the European Environmental Agency says. Euro 7 is considered a crucial measure to tackle that problem.

With the EU phase out of all fossil-fuelled vehicles entering into force in 2035, cars and vans will need to continue to be as clean possible, Dilara remarks: “Even though sales might stop in 2035, cars will remain on the streets for another 10 to 15 years and will continue to pollute, therefore we need to act now.”

Dan Lert, Deputy Mayor of Paris, in charge of the city’s ecological transition, climate plan, water and energy, asked to push boundaries even further by banning a new series of pollutants harmful to both human health and the environment. “They include particles that are smaller than 23 nanometers, ammonia, nitrous oxide, formaldehyde and also non-methane organic gases,” said Lert.

Euro 7 is expected to impose more stringent testing and measurement conditions for vehicles; add non-exhaust factors such as wear-and-tear from breaks and tyres to the list of air pollutants; and toughen particle filter standards.

But rules can only go so far, observed Loos, calling for transparency and a proper enforcement of the new legislation. Euro 7, he said,  “needs to be clear and simple. Proper information means that when you as a consumer go to a dealership, you need to be able to understand what Euro standards mean in order to compare emissions from different cars.”

The age of vehicles on EU roads and the subsequent pollution levels they emit is another crucial element for the EU Commission to consider, said Fabian Sperka, Vehicles Policy Manager at the Transport & Environment association.

One way to stay on course and reign in pollution in the interim, said Dilara, is to tighten the rules for the oldest cars until their complete phase out. 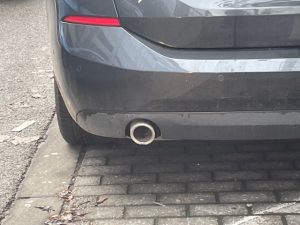 A few metres from the exhaust

Toxic gas emissions are responsible for a long list of diseases, from asthma to cancer to heart attack, with nitrogen dioxide one of the main culprits. High concentrations of this gas can be found in congested and busy urban areas, as highlighted by the London Air Quality Network.

Pollution causes illnesses such as heart and lung disease, stroke, lung cancer as well as biodiversity loss, according to the latest European Environmental Agency data.

No more, says the EU. The block aims to lower the number of premature deaths by 55% within 2030, as outlined in the EU Commission’s 2021 ‘Zero pollution action plan’. Ultimately, the goal is to reduce toxic air to levels no longer harmful to humans and nature, as part of the Green Deal strategy.

For the moment, however, the air quality levels designated as safe by the EU are below those recommended by the World Health Organisation, which recently published a new set of guidelines.

Martin Lutz, Head of Air Quality Management in Berlin and Co-Chair of the Eurocities Working Group on Air Quality, said the new emission rules will give municipalities a much-needed push to align with the latest WHO air quality standards.

“Euro 7 would be the key instrument to lead us there, and it’s important because if you think about it, when you breathe and bike or walk on a pathway, you’re only a few meters from the exhaust,” Lutz said.

You can listen to the full Euro 7 debate from 3 December 2021 on our podcast: