Ukrainian children are back to school in EU cities

As of September 2022, some 2.25 million Ukrainian minors have arrived in host countries. Before the back-to-school season, over 33,000 children participated in learning programmes this summer.

Access to education is not a minor issue. Welcoming cities must include Ukrainian children quickly into existing childcare and education services, addressing their learning and development needs.

Ivelina Borisova, UNICEF expert on Early Child Education and Care presentation, outlines that there is “a massive number of young children that have entered a new context. Their development and learning have been interrupted in various ways. They are particularly vulnerable because they’re young and their brains are developing rapidly to potential developmental challenges and learning losses.”

Borisova underlines the key role of education systems and opportunities for children to socialise early on in their new environment for effective social cohesion and integration. The lack of a common language is a hurdle that can be overcome, with new bonds and community connections remaining possible in spite of it.

“Preschools and kindergarten are fantastic places to support not just the learning and development aspects of children, but also their health, nutrition, mental health and parental support that may be needed,” she adds.

“Municipalities are a fantastic forefront of this work because in most cases they have strong jurisdiction over preschool education and kindergarten, so it’s an opportunity to do an amazing job in this area of inclusion and social cohesion between communities,” adds the UNICEF expert.

The truth is that many municipalities have faced similar challenges since March. Smoothly integrating Ukrainian children has entailed enormous efforts – limited capacities of schools and the number of students in a classroom, municipal budget stretches, language barriers and lack of Ukrainian teachers, are some of the challenges cities are overcoming. The energy crisis has become the most recent addition.

“Finding the necessary funds has been a significant issue for us,” admits  Horia Tomescu, Deputy Mayor of Bucharest.

Prague City Councillor, Vit Simral, warns that “if we can not build more schools or classes because we do not have those resources, the system is in danger of being overloaded.”

Cities have had to find solutions to this unprecedented challenge quickly and efficiently. Against all odds, that’s exactly what local governments are doing. Cities are managing to mitigate language barriers by hiring Ukrainian teachers; to counter the lack of facilities, they have opened more locations; to deal with the potential trauma triggered by a violent conflict in childhood, they are providing psychological help.

Since February, over 6,200 Ukrainian children between 6-18 years old have integrated into Berlin schools, and about 1,000 children are waiting for places. “We’re building places in schools now and then,” explains Elke Biester, of Berlin’s Senate Department for Education, Youth and Family. Those on the waiting list take part in temporary learning groups.

Cities also have some solutions in common. Most of them have overcome all these obstacles and budget stretches through flexible cooperation and coordination with NGOs, volunteers, and national institutions.

In Prague, the situation was critical. “The number of children and families, mostly women, arriving overwhelmed the system, so we had to coordinate very closely with the agencies in Prague and outside,” says Simral. 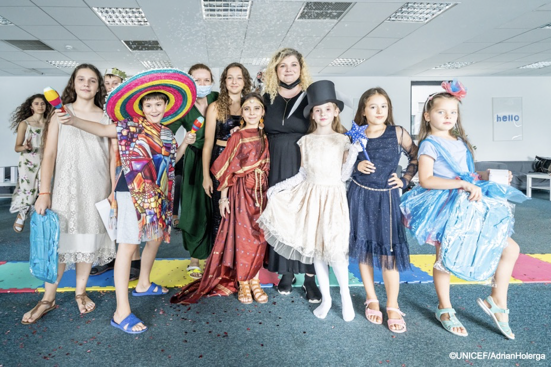 Bratislava aligned with its districts and the ministry of education to find appropriate learning integration solutions. Berlin organised working groups within the government and with NGOs to find solutions. In Tomescu’s words, “neither the organisations nor the municipality could have handled this on their own. That’s a big takeaway from this.”

The closest city to the Ukrainian border

Lublin demonstrated an efficient response by launching an emergency meeting only five hours after the breakout of the war to address the situation. By the end of the last school year, 2,400 children had integrated into their education system, but the administration believes the number will triple by the end of this month.

“The first elements were daycare centres for children established on the second day in cultural institutions all around Lublin,” says Krzysztof Stanowski, Director of International Cooperation from Lublin.

NGOs, representatives from the city and cultural institutions, rapidly agreed on places

where mothers would come with the children. They also established recreational and educational activities as ​for children, as well as psychological services

“There were no Ukrainian books in Poland on a mass scale before the war, so we got an agreement with the print houses from Ukraine to print them in Poland. We got copyrights and master copies,” explains Stanowski. Some of those books was distributed among daycare centres, kindergartens, schools and public libraries.

90% of Ukrainian children hosted by Lublin learn ​in integrated classrooms with Polish students.

Borisova agrees with this method, “distance learning is not even an option for early childhood education.” However, Prague, Bucharest and Berlin face the same issue: some parents do not want to enrol their children because they hope to be back in Ukraine shortly. Some of them prefer to attend Ukrainian online schooling, which is not contributing to genuine integration.

It was generally agreed that even if the war ends tomorrow, it is projected that many current refugees will stay in foreign countries. Therefore, their integration (both parents with their jobs and children and education) needs to be planned.

Considering this, UNICEF expert on schools and higher education Alberto Biancoli adds that “on the one hand, we need to integrate children in the national education systems. But also, flexibility and multiple pathways are crucial elements to consider.”

75% of children hosted by Bucharest follow the Ukrainian curricula through online schools. “Ukrainian and Romanian are not even vaguely similar. We have different alphabets. The language barrier confronts us, and because most refugee families believe they’ll be able to return to the country soon, only a third of parents prefer to integrate their children into the Romanian school system.”

Bucharest seeks to expand the programmes already in place to receive more children as the war continues. “This means we must offer children opportunities to learn the Romanian language in a fun and appropriate way – online learning facilities that also have space for interactions, early education facilities and job opportunities for parents, imperative for them and the children,” concludes Tomascu.

In contrast to the Romanian language, Slovak and Ukrainian are pretty similar, making things easier in Bratislava. The municipality hired Ukrainian teachers and staff, “but we also wanted to include Slovak children to prevent segregation. It’s easy for children to learn the local language with other children,” explains Nagyová Slavka, from the Education Department of Bratislava.

In the case of adolescents, the city included intensive Slovak courses in the programme for them to catch up with the standard education system before the start of the new school year. Berlin follows a similar approach by providing a trajectory from temporary welcome classes to learning German for proper inclusion in the regular education system.

Children are integrated into school in “temporarily welcome classes” to learn the language. Additionally, Ukrainian teachers are employed to teach them in their first language. Lublin hired 50 Ukrainian teachers to mitigate the learning barriers of those who are not yet familiar with the Polish language.

Due to this challenge, from the spring of 2022, Prague districts have run adaptation groups for children from Ukraine. ​Children are provided not only with language training but also with a basic introduction to the Czech Republic, which has a significant socialising effect.

Prague expects “many more refugees if the war, unfortunately, keeps going through the autumn and winter. The energy crisis will hit more families, so they may have to flee their homes,” warns Simral.

Not only that, but the rising cost of living and energy crisis pose the most recent big challenge for local governments in integrating many newcomers (especially for frontline cities), making the financing unsustainable for the near future.

In Lublin, 95-97% of the families are hosted by other families, but taking into account the rising cost of living, “will the Polish families be able to keep hosting?” wonders Stanowski.

The energy crisis is only the last challenge that cities face when willingly welcoming and integrating children. But cities have also shown they can proudly find solutions and learn from each other. “It’s a fantastic momentum to broaden the Early Child Education and Care system across cities,” says Bolinova.

Learning systems can be reinforced for the future welcoming of people, as some of the cities’ representatives pointed out. Biancoli reminds us that, even now, “other children need more support and need to be more included in our services.”

The information in this article comes from a webinar co-organised by Eurocities and UNICEF last week to support the integration of Ukrainian children arriving in our local communities. The webinar included contributions from representatives of Prague, Lublin, Berlin, Bratislava and Bucharest and UNICEF’s experts in education. You can watch the webinar, the first of three planned in the coming months, here.