The power of people to end air pollution

Most Europeans are worried about the impact of air pollution on their health, according a recent Eurobarometer survery, and most also feel that air quality standards should be strengthened.

Yet, the newly proposed EU Air Quality Directive, which aims to align rules with science by following the latest World Health Organisation air quality guidelines, is shy about including people as part of the solution. The new directive should strengthen its consideration of participatory approaches beyond awareness raising since it will influence European policies.

The contribution of citizen science

Citizen science brings society closer to the science and policy processes and empowers people to better understand issues such as air quality. Citizen science initiatives support evidence-gathering to close the current knowledge and data gap, and through their educational and public awareness components, can encourage behavioural changes. Given the existing deficiencies in the governance of our air quality, innovative and participatory approaches are crucial.

#CitizenScience enhances scientific research, involving citizens who contribute with their intellectual effort, their knowledge, and with their tools and resources.#environment #Sustainability

Despite that, there have been many discussions about the limitations of citizen science, such as the ad-hoc nature of many initiatives on air quality and the concerns over data quality. The nature of citizen science data is different but still valuable. It can complement and enhance the granularity of air quality data. The use of non-official data and other forms of collective intelligence must be reconsidered in light of new technological developments such as low-cost air quality sensors and big data.

Citizen science data also has the potential of being considered as evidence for environmental litigation in European courts. In Belgium, for instance, a court stated that authorities should consider air quality measurements gathered in the first monitoring campaign of the CurieuzeNeuze project in Flanders. These measurements should not be excluded just because residents make them.

Do you work on #CitizenScience?@CitiMeasure is testing its guidelines to help you impact #BehaviouralChange, #PolicyMaking and #DigitalInclusion.

It also developed an inventory of #AirQuality monitoring initiatives.

What is more, air pollution is a systemic problem. The recent energy crisis, for instance, will bring up more traditional pollutants. Vulnerable communities are most affected by air pollution, and citizen science data can reveal discrepancies with greater transparency.

Eurocities’ EU-funded CitiMeasure project has developed an inventory to collect technical and descriptive information on citizen science initiatives on air quality. So far, more than 30 initiatives representing different organisations have displayed more than 37,000 devices to measure more than 13 air quality parameters all over Europe.

For example, xAire represents large-scale monthly air quality monitoring in Barcelona. It is a science project that involves schools and families to both collect new geographically accurate data on air quality and empower themselves to present this data rigorously in front of the city council.

.@barcelona_cat boasts the first and only #CitizenScience Office in Europe.

Their rich network of initiatives and practitioners and experience are the ideal testbed for @CitiMeasure's Behaviour and Policy, and #DigitalInclusion Guidelines.

In URwatair, participants monitored urban air pollution using low-cost air quality sensors. Another example is Samen Meten in The Hague and Rotterdam, which seeks to complement and improve the official national data and models with citizen science.

Cities and other organisations can use CitiAIR to understand better what has been done in these projects and how. The online inventory thus enhances comparability in the field. If you or your city are involved in citizen science for air quality monitoring, you can contribute to CitiAIR by adding your initiative here. 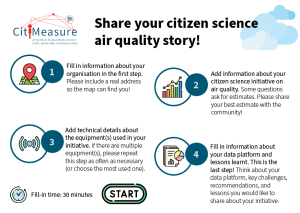 The citizen science community is growing and provides examples of bottom-up approaches to promote effective actions for cleaner air. Additional funding, support and recognition have been among their demands for many years. Given the complexity of the new directive, and all the difficulties that beset its targets, it is time to empower people to contribute to solving the pollution crisis from their houses, their streets, and their cities.