The climate challenges lying ahead

“In Finland, cities are working together with the national government to reach the ambitious goal of climate neutrality, the world’s first fossil-free welfare society by 2035.”

With these words, Jukka Mäkelä, the Mayor of Espoo in Finland, opened the third and final day of Eurocities annual conference. The European Union is set to achieve the zero-emissions target by 2050, but Espoo and other Finnish cities plan to get there 15 years earlier.

“The transformation toward sustainability is the best and only business for modern companies, and cities can support it by functioning as living labs where new sustainable solutions are developed,” said Mäkelä. “We can only reach climate neutrality when all political levels work towards the same goal,” he added.

Following in the EU climate footsteps, cities all over the region have signed up for the EU Mission “100 Climate-neutral and smart cities by 2030″. The scheme aims to slash emissions rapidly and pioneer an innovative approach with citizens and stakeholders.

Seventy-one out of the 112 participating municipalities (100 EU members plus 12 cities from associated countries) that have been selected to join the Mission are Eurocities members.

“We have seen heat records being broken around the world. This speaks clearly of the challenges ahead if we do not curb global warming in accordance with the Paris agreement,” said Timo Harakka, Minister of Transport and Communications of Finland. “Russia’s unlawful attack on Ukraine has intertwined climate policy and security policy, emphasizing the need to boost independence of the European energy sector,” he remarked.

Breaking free from fossil fuel and natural gas is one of Finland’s goals, said Haraka, arguing that the country should become independent from Russian energy supplies on the way there.

“Cities are important partners in achieving the goal of a carbon-neutral Finland by 2035. Cities and municipalities play a key role in the implementation of measures and as frontrunners in housing, energy, and transport solutions,” Harakka said.

A just transition in cities

Taking centre stage at the conference, Frans Timmermans, Executive Vice-President of the European Commission, reminded the audience that “cities are at the heart of our fight against the climate and biodiversity crises. It’s about greening urban spaces, it’s about tackling air pollution, it’s about reducing energy consumption in buildings, it’s about advancing clean transport, it’s about looking in a completely different way at waste management.”

“Cities, as always in European history, are centres of innovation, inspiration, and action when it comes to everything that the world throws at us: the reaction starts in cities,” he noted.

Cities are hardest hit by climate change because of their high population density, therefore cities are the ones looking for solutions, the Executive Vice-President added. “The climate crisis can only be tackled bottom-up,” Timmermans told the audience. National governments and the EU need to provide municipalities with the necessary funds for the climate transition and make sure that it is a just transition, he added.

A just transition means that no one can be left behind. Redistribution is the core element of politics; therefore, governments and the EU must provide the necessary aid to European cities as well as security to the private sector, Timmermans said.

Youths’ contribution will be a crucial element of the green revolution, the Executive Vice-President remarked: “Young people are going to make this transition happen in cities, we need to create the conditions for them to do that.” Alliances must be made between cities, particularly cross-border alliances, but also with rural areas, “the background of healthy cities,” he added.

“We are under attack”

In his closing remarks, Timmermans waded into Russia’s attack on Ukraine and on the war unfolding at the EU’s doorsteps. Russian President Vladimir Putin’s war orders are an act of aggression against democracy and EU values, he said.

“We are under attack by a man who just thinks he has the right to just march into a neighbouring democratic country, make that country get on its knees in front of him, rule that country in an autocratic and despotic way. And to get there he’s ready to destroy absolutely everything. So many people had to flee, and hundreds and hundreds of people are dying every day. This is an attack on our way of life,” he told the audience as his words were greeted with raucous applause.

“If the unthinkable would happen, which we would never allow, and Putin come out of this victorious, he would immediately say ‘I’ve proven that democracy is weak, the West is decadent and autocracy rules.’ And that would have an effect on all of our societies because we have Putin admirers in all of our societies. They are now all hiding under the table, but if he wins, they’ll be dancing on the table, and they will be trying to impose the same vision of autocracy on our societies. That would undermine our values. The values born in European cities need to be defended in European cities,” Timmermans added.

European cities have been leading the EU’s efforts to implement ambitious climate actions. Whether signing agreements with other partner cities or taking steps to tackle climate change alone, municipalities are key to achieving the green transition, as is citizen participation in this endeavour.

Munich – which aims to reach the zero-emission target by 2035 – is implementing a district-based approach, inviting citizens to take part in the process, and implementing new forms of governance.

Juhana Vartiainen, Mayor of Helsinki, said that “cities are facilitators, benchmarks, and optimisers” and called for top-down regulations. He said that cities should lead efforts toward a green transition and facilitate this process through citizen participation.

Dario Nardella, Eurocities President and Mayor of Florence, cautioned against “the social impact of new green deal and energy transition because people are afraid of the social consequences.”

Therefore people must be on board. “We must transmit how important is to work together;” we also need concrete examples, “we must show what we have done;” and “we must be clear about how big opportunities we have,” he remarked.

Adding to Timmermans’ remarks on Ukraine, Nardella said that mayors at the conference have drafted a strong political declaration that is pushing “all European institutions and governments to accelerate the candidature procedure to have Ukraine in the EU.”

Ian Ward, Leader of Birmingham, reminded the audience about the need to create positive narratives and that politicians’ job is to convince residents of the benefits of the green transition.

“We have to persuade people that a future city with cheap, reliable and speedy public transport and safe and accessible ways to walk and cycle is not only possible but hugely desirable,” Ward remarked.

Tuuli Kaskinen, CEO of the Climate Leadership Coalition, highlighted that the climate transition is costly and needs to find appropriate financial backing. Some of the money will come from the private sector, some from the public, but all actors must agree with their roles, she said, adding that citizens must also take part in the process.

“There have to be ways for consumers to do that [reduce their consumption] and that comes from better services and products. It’s better public transportation, better cars, etc,” she explained. 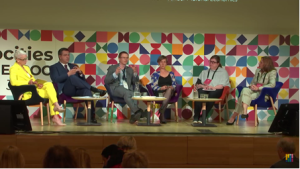 Cities also need to be innovative and need financing to become climate neutral. So how can municipalities be supported within the 100 climate-neutral cities by 2030 mission?

To Natalia Chueca Muñoz, Deputy Mayor of Zaragoza, “time and money are the keys.” Therefore, she notes the need for more objective criteria for funds and also more direct funding, and direct calls for cities. “We need to work with private companies, and they need support directly from the EU,” she said.

Anna Lisa Boni, Deputy Mayor of Bologna and former Eurocities Secretary General, called for  “a real commitment, horizontal and vertically” and for working with private stakeholders. Investors need stability, and regulatory stability, and often the implementation of projects is messy. Local, regional, and national governments don’t usually agree on everything and change takes time, so there’s a need for vertical stability to help speed processes and also to attract private investment, Boni remarked.

Robert Westerdahl, Director & co-founder of Material Economics, highlighted the need to engage with innovative business models. “It’s essential to mobilise private sectors and citizens to contribute to the green transition,” he said.

Cecilia Brinck, President of the Stockholm City Council, noted the importance of forging public-private alliances and fostering change quickly. She said that academics must also be invited to participate in the process of the green transition.

“We will only be able to overcome climate change with the support of our cities,” said Apostolos Tzitzikostas, President of the Committee of the Regions, as he reminded the audience of the importance of the urban areas, where three-fourths of Europeans live.

No city should be left behind, Tzitzikostas noted; however, “today the financial architecture still remains a major challenge for all of us.” It must be made easier for local governments to finance these climate initiatives,” he said while adding that he feels optimistic about the future.

Watch Timmermans’ speech as well as the two following panels: