More than 150 cities stand with Ukraine

The bell tolled 17 times across the Piazza Santa Croce in Florence this Saturday. Each chime signified one day of war in Ukraine. Already two more are needed.

The human cost of this war was brought home in a live address from Volodymyr Zelenskyy, President of Ukraine, who highlighted the 79 children killed so far as a result of the Russian invasion of his country.

Zelenskyy addressed not only the 35,000 strong crowd in Florence, but reached out across Europe, as at least 177 other muncipalities took part in the #CitiesWithUkraine day of solidarity.

“We are here to ask the Russian government, with all the breath we have in our bodies: stop, please stop, before the rubble can bury any diplomatic initiative, stop and listen to the voice that comes from the European squares because we want peace,” said Dario Nardella, President of Eurocities and Mayor of Florence, who initiated the demonstrations of solidarity that were carried out across 23 European countries.

The #CitiesWithUkraine actions, held in city squares and in front of city halls highlighted the Russian assault on democratic practices and freedoms, while also bringing attention to the crucial links forged between cities. Right now cities across Europe are receiving and integrating the 2.5 million refugees who have been forced to flee their homeland, as well as organising to send vital medical and aid supplies.

From human chains, to speeches and concerts, the cities that took part this weekend showed a diversity of action.

In Rotterdam, where several thousand people gathered, demonstrators chose the early evening setting to use their phone lights to form a candlelight vigil.

Elsewhere Brussels and Oslo lit up famous monuments, and the six largest Finnish cities used the occasion to share a statement of support for Ukraine and highlight that they have collectively sent €1.5 million in humanitarian aid.

In Zagreb, firefighters were out in force to show their support for the city’s efforts, while in Seville people gathered outside the city hall.

While Florence was perhaps the biggest of all demonstrations, across Italy there were at least 30 others, including in San Marino and Palermo. In Naples, a ‘solidarity chain’ brought the crowd together:

A message from Rafał Trzaskowski, Mayor of Warsaw, where thousands of Ukrainian refugees have already headed to, and work is continuing day and night, stated that “the signs that we are together are very important”.

Meanwhile, Kostas Bakoyannis, Mayor of Athens, warned that “democracy, peace, human rights, international law, are threatened by the dark forces of division, or authoritarianism, of violence, of war, and we have to be very clear about where we stand.”

Proving that the UK keeps strong ties to Europe, especially at the city level, the cities of Birmingham, Edinburgh, Newcastle, Wolverhampton and Bristol also joined in the actions. And in France, many cities, including Paris, Marseille, Reims, Angers, Lyons, Nantes and Nice joined. In Bordeaux a concert was held to show support.

In Ghent, hundreds of people formed a human chain in front of the city hall to “stop the madness,” and speeches were made by locals of both Ukrainian and Russian origin.

Many municipalities joined in from the Netherlands. A nice example from Eindhoven saw school children drawing heart shaped murals on a city square.

In Germany, where around 20 municipalities took part, Dresden’s Philharmonic Choirs in cooperation with the City of Dresden, led a ‘sing for peace’


Children crowd around a large heart shaped mural drawn in chalk on a city square in Eindhoven, as part of the #CitiesWithUkraine demonstrations on Saturday 12 March 2022
In Seville, Mayor Antonio Muñoz spoke to a crowd
In Barcelona, an outdoors concert is held in one of the public squares as part of the #CitiesWithUkraine demonstrations
In Palermo, Mayor Leoluca Orlando joined young demonstrators to highlight the war in Ukraine
In Dresden, the philharmonic choirs led a 'sing for peace' - © City of Dresden
In Constanta, demonstrators found time to make their sentiments felt
A Ukrainian flag in Piazza Santa Croce, Florence
Mayor Dario Nardella address the crowd assembled at the Piazza Santa Croce
In Cluj Napoca, residents set up a candelight vigil, following earlier speeches
Forming a human chain in Ghent, with Mayor Mathias De Clercq

For the cities in countries closest to Ukraine, the focus has been on dealing with the huge influx of refugees. Nonetheless, cities such as Tallinn and Riga in the Baltic states, as well as Constanta and Cluj Napoca in Romania, all found a way to mark the occasion.

For Polish cities, the burden has been the heaviest, as such, while Bialystok, Gdansk, Katowice and Warsaw all shared messages of support, their focus is currently on the integration and reception of refugees.

Demonstrations of solidarity on the local level carry weight. Many Ukrainian cities are twinned with other cities in Europe. They work together through European projects and in networks like Eurocities.

Ukrainian cities have been the targets of Russian aggression. Municipal buildings have been bombed and their populations forced to endure unfathomable hardships.

Recently, the Russian war has taken on a new twist: In Melitopol, Mayor Ivan Fedorov was reportedly abducted on Friday, with the same happening to Yevhen Matveyev, Mayor of Dniproroudne, just yesterday.

As was demonstrated by the huge outpouring of heartfelt sentiment this weekend, alongside the ongoing efforts to support Ukraine, Europeans are sending Russia a very clear message: no to war.

Take a look at more #CitiesWithUkraine photos on Flickr: 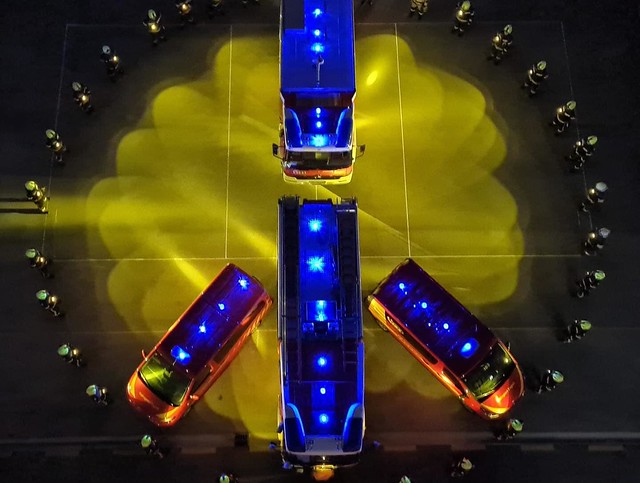