Leipzig deals with the many challenges of welcoming refugees

“In response to the Russian invasion in Ukraine, the European Union has responded quickly, in a coordinated manner and consistent with democratic and humanitarian values,” said Thomas Fabian, Deputy Mayor of Leipzig, on the influx of Ukrainian refugees towards the EU and the efforts of the whole continent in welcoming them.

Fabian hopes that both his city and the EU will “see this as a window of opportunity to ensure that all refugees, regardless of their origin and religion, the colour of skin, gender, or sexual orientation are receiving the same chances and have the same rights in all European countries.”

Leipzig, a city with just over 600,000 inhabitants, has welcomed 9,000 Ukrainians. They have settled and integrated as part of a great effort by the city, its public servants, and civil society. Many of the refugees asked for social security assistance as asylum seekers. Data shows that about 75% of them are female and 35% are under the age of 18.

In total, until January 2022, the city had approximately 11,500 refugees from all over the world; 8,500 of them already registered in the system for basic security, that is, with their asylum granted and 3,000 still waiting. 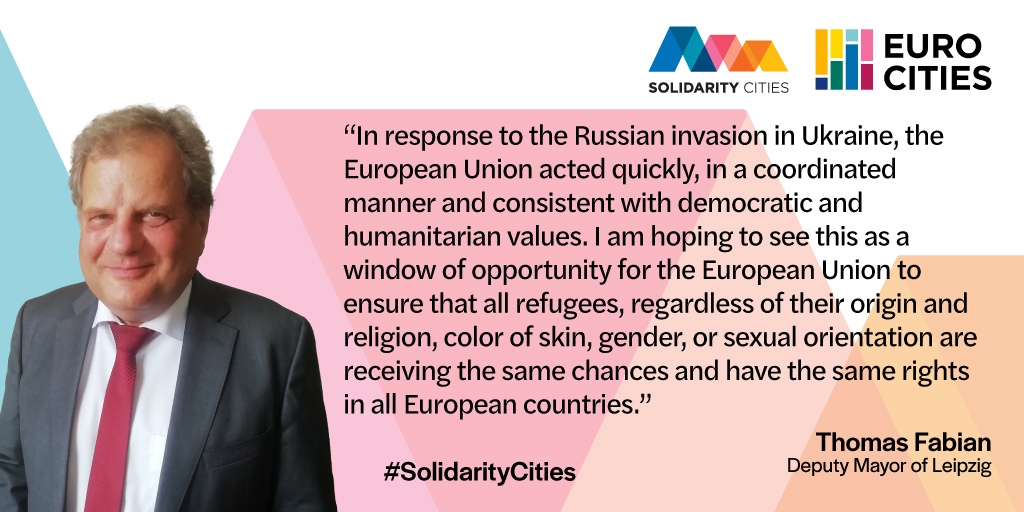 “The challenges are not new,” said Fabian, adding that “the magnitude is putting additional pressure on local administrations. And we must not forget that there are wars all over the world where people are forced to become refugees. The war in Syria is still going on, and we can hardly imagine the terrible suppression girls and women are facing today in Afghanistan. Refugees from other war-torn countries are confronted with considerable difficulties in accessing their rights and receiving international protection.”

And the challenges are many, from housing to jobs and schools for children, and even prejudice faced not by Ukrainians, but by Russian citizens living and working in the German city.

“We are facing something we never imagined to happen: A war close to the European border. Peace and democracy are threatened. Millions of citizens in Ukraine experience terrible aggression. They are forced to leave their homes, many fleeing into European cities,” said Fabian.

Out of the 9,000 Ukrainian refugees, about 1,000 are housed by the city, and 8,000 are housed through private initiatives and civil society. But, “every week there are more people asking the city to provide housing,” explained Pia Lorenz, Policy Advisor at the City of Leipzig, “as the people they are with can’t host them anymore.”

The city is, then, looking for collective accommodations, flats or even hotel rooms. “Many already have found flats and are renting them by themselves. They receive social assistance that covers their rent up to a certain amount. Considering the rent market, Leipzig is still better off than other major cities,” she further explained.

Asylum seekers (single persons) are granted about €370 per person as a monthly allowance and an extra €360 for housing in case they decide to look for a place to stay for themselves. Asylum seekers are managed by the social services department and once their asylum status is granted, they become part of Germany’s basic job security system, that is, they’d be considered jobless and would receive the same help and social benefits as every German citizen does.

Since June 2022 refugees from Ukraine arriving in Germany are granted basic social security right away, just like any other German citizen. Benefits are managed by state-run job agencies that also provide consultation on what the job market needs and what refugees can offer to the job market.

Concerning schooling, by mid-July, the city has almost 700 children under 6 years old whose parents want them to go to kindergarten and 220 who had already been placed. Also, 1,600 schoolchildren applied for positions in regular schools.

Welcome and integrating everyone is Leipzig’s goal “because most of us are so proud of the diversity, inclusivity and vibrancy migration brings to our cities,” Fabian says. “Diversity has become a trademark of successful cities.”

However, prejudice is an unfortunate part of life. If on the one hand Ukrainians are being welcomed, on the other hand, a 20-page report from the Migrant’s Council, an elected official council of the city of Leipzig, reported that “a number of Russian citizens were having problems with their bank accounts when sanctions were put in place at the beginning of the conflict. They received letters from the banks that they had to show a residence permit,” explained Lorenz.

Also, Lorenz noted, there are reports of “in schools yards, kids screaming at other kids, ‘Russian murderers’, calling to ‘hit the Russians’, etc.”

“Teachers and heads of schools prepared a good number of interesting materials to work with the kids on what was actually happening and on the idea that what a leader of a country is doing might differ to what the people with the same nationality think,” she added

There were also reports of prejudice on social media, people cursing people with Russian names or surnames (in one case the person was actually from Moldova) and people being cursed in the streets for speaking Russian.

Despite the challenges and difficulties, Leipzig is working to welcome and integrate everyone and to provide decent care to all as well as schools for children and jobs for anyone looking for them.