King or Pawn? Where does REPowerEU leave Europe?

Less than one month into the war in Ukraine, Ursula von der Leyen, President of the European Commission, signalled that the EU needed to move away from reliance on Russian fossil fuels. In so doing, the EU might in one fell swoop, stop financing Russian aggression and uphold European values.

This week, as we approach the three month mark in this war, the REPowerEU plan was officially launched. This comprehensive policy package promises to cut Europe’s dependency on Russia as quickly as possible – and no later than 2027 – via a range of short and medium term measures.

One risk with this quick fix is that, as the EU seeks to diversify its energy supply, the investments in new pipelines and import terminals could lock the bloc into new supply lines that it would have to stick to, perhaps for decades. This could, in turn, both limit the potential scope of the EU’s own climate goals, while creating new dependencies on countries that may not be aligned with EU values.

On the other hand, the final package does place a significant investment emphasis on ramping up the transition towards renewable energy, even as little of the strategy’s international dimension is focussed on securing new, sustainable partnerships.

These investments include increasing the EU’s legally binding commitment to ensuring renewable energy represents 45% of its overall energy supply by 2030 (up from the previous 40% target), and a new commitment on solar energy.

Establishing energy savings as the first of these pillars is a reassuring step; as the European Commission’s Executive First Vice President, Frans Timmermans pointed out during the announcement, it is the quickest and cheapest way to address the current energy crisis and reduce bills. It also allows municipalities and regions to take on a leading role, given their ability to develop and deploy energy saving measures suited to the local context.

As Carlos Moedas, Mayor of Lisbon, explains, “the key strategic question for us in Europe is what we can do to stop wasting energy. There are simple solutions that can come from technology and from collaboration between the public and private sectors. For example, by changing all the public lighting to LED – as we plan in Lisbon as part of a goal to become a carbon-neutral city — you have savings of more than 80% to the taxpayer.”

It is worth pointing out that the REPowerEU proposals build on initiatives already making their way through the EU’s legislative cycle. The FitFor55 package – which sets the EU’s legislative agenda for cutting emissions by 55% by the end of the decade – is chief among these. For instance, REPowerEU will boost the binding energy efficiency target from 9 to 13%. Similarly, the big announcement on renewable energy production lifts the FitFor55 target of over 1,000GW to somewhere over 1,200GW per annum in the EU.

This increase – an anticipated €210bn investment by 2027 – is going to be reliant on many factors. For example, the accelerated deployment of renewables will not happen without a skilled workforce and strong supply chains that can deliver on the growing demand for clean technology. While envisaged under the Pact for Skills, local skills partnerships and training of municipal staff will be crucial for investing in human capacities and ensuring a rapid uptake of renewables. 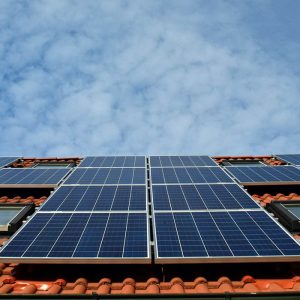 A ray of hope for renewables

One highlight of REPowerEU’s focus on accelerating the energy transition is to double solar photovoltaic capacity by 2025 and install 600GW by 2030. This includes a Solar Rooftop Initiative with a phased-in legal obligation to install solar panels on new public and commercial buildings and new residential buildings.

“We welcome RePower EU especially for its intention to boost the production of energy from renewables and ease procedures,” comments Matteo Lepore, Mayor of Bologna. “Member states must translate this very fast on the ground so that cities can support renewable local energy markets and decrease the power of fossil fuels,” he added.

Cutting Europe’s dependence on fossil fuels will not succeed without cities on board, which are responsible for around 75% of global CO2 emissions. City authorities are therefore essential to accelerating the much needed transformation, by reducing consumption, scaling up renewable energy projects and democratising the provision of clean energy.

This would seemingly dictate that the smartest place to invest is directly with local and regional authorities. Given that a large share of the €210bn planned financing is targeted at the provision of renewables, this is an area where cities can really make a difference.

While no new money is associated with REPowerEU, the core amount assigned to it will come from the existing National Recovery and Resilience Plans, with an extra chapter added to each one. However, this will not necessarily lead to an even canvas across the EU.

Indeed, as Gergely Karácsony, Mayor of Budapest, said, “Security of supply as well as energy independence from Russia are particularly important issues in the Central and Eastern European region, and cities, as major energy consumers can do the most for it. Hence, no effective REPowerEU proposal is possible without specific attention to cities and setting up direct financing channels to cities to reduce their energy demands.”

In addition, without direct funding, it can be difficult to see how cities such as Budapest, which have not been party to their National Recovery Plans, will receive any funding.

In the long term, clean energy must be the answer to Europe’s energy sovereignty conundrum, while also pushing for green goals. In the short term, there will be many possible bones of contention so long as Europe sticks to a course that includes fossil fuels. At least for cities, however, there are some rays of hope, and the European Green Deal still looks to be achievable.

Bologna, Budapest and Lisbon are all part of the Mayors Alliance for the European Green Deal, which strives to show that a sustainable transition is possible, with mayors and cities on board.