We took a moment out to catch up with John Jorritsma, mayor of Eindhoven, recently to find out about his vision for smarter cities that work for and with people.

How do you involve your citizens when you make your decisions? How do you make sure that the technological or other incentives are well understood and supported? 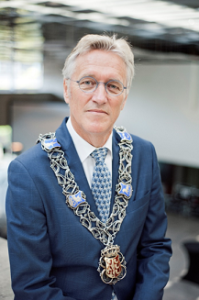 We co-create. We have found out that every time we are sloppy in the identification of citizens’ (or end users’) needs we have failed. We were stopped in court, people massively disobeyed or ignored and / or we were punished politically.

Let me give you three examples of successful co-creation.

Firstly, in line with our national policy to decouple completely from natural gas and turn to sustainable energy sources in 2050, we have a similar city policy. From the perspective that the city should facilitate and energize the early adopters, ‘the willing’ (nodes of innovation) we have challenged four different organizations to kick start as many initiatives to reduce CO2 emissions in four neighbourhoods.

The Local NGO 040 is offering their ESCO knowledge for citizens willing to co-operate in sustainable energy exchange; one SME is using a digital information platform giving insights to sustainable energy investments versus reductions in user costs; two SMEs are serving and unburdening the citizens in installing sustainable products in their house.

Secondly, we have the ongoing Smart City Project Triangulum, part of which involved the revitalisation of a neighbourhood lake. The process that was followed by city project leader began with observation on the spot, including interviews with key people in the area, walkers, joggers and citizens living along pond. The problems and issues were gathered from the bottom up. These included the security and safety of private gardens and the route along the unlit pond, and to upgrading for walks in winter, but without disturbing the local wildlife.

We held sessions on how to design the route with citizens. The results that came out were that we added LED lighting to two ponds but dimmed the lights enough to create a compromise between people feeling secure and not disturbing the bats. We used solar charged LED lights on a paved route alongside the ponds indicating four different potential speeds for walkers and runners. We also added extra lights at the road crossing indicating the approach of walker or runner to car drivers.

This resulted in a fun health route that successfully restored faith in co-operation with local government and, what’s more, between citizens of different backgrounds and groups. The relationship between the role out of smart uses with SME, city, sport clubs, schools and the Technical University of Eindhoven is ongoing. This project was a great example of a successful combination of a smart solution with building district participation and trust.

The third and final example relates to the pre-competitive dialogue roadmap for lighting and implementation, which is an ongoing project. We engaged in this because we wanted more than sustainable street lighting; we wanted a smart grid of which LED lighting was an element, but that could function as a smart, city-wide backbone for citizen and other stakeholder services. We did this using a minimum tender document requesting results not specifications; we awarded points to applying consortiums based on criteria like flexibility, openness, city data-ownership, plug and play, how to involve citizens and other stakeholders, etc.

The tender was judged by a team with different representatives, including academia, local government, and citizens. We have learned that this is a longer process than normal tenders, but it gives better quality for money. It is difficult because you must understand the other and make sure that all receive a fair share. Standards are also an issue, as is the fact that the investment and value is long term, and the rewards do not necessarily come to those that invest today. After closing the deal, the dialogue goes on; it’s not just implementing a simple contract.

What are the three main challenges you had to confront in order to proceed towards your smart city vision?

These questions are posed in the past tense as if we have this already far behind us. This is however not the case. We are in the middle of that constant challenge and it’s not over yet!

We are going through transitions that shake the foundations of our 20th century society. Globalisation and digitisation request drastic renewal of our attitudes as citizens, democratic decision making and recap of the role of government and its institutions. Biotech and computech innovations are coming faster and faster. Cities are growing and the demands on their abilities and means are immense. What are the main challenges then? These are thus the same as the recommendations for other city leaders that would like to start a smart city approach or project.

The first is to energise the spiderweb of nodes of innovation. Facilitate the ‘willing’ and work with them in multi helix approaches. And yes, these concern our citizens and their NGO’s, but also our companies, institutes of health, education, care, and so on. The second point is balance. There must be balance between the haves and have nots, can and cannots, digital literates and illiterates, because a society can only function properly when citizens are willing and can expect a basic level of solidarity. A final recommendation is the renewal of governance instruments. Actively pursue a set of new instruments needed by cities and regions to prevent destructive and stimulate positive environmental behaviour, by enterprises and citizens.

What is your approach to data and data management?

The public space in cities all over Europe and the world is rapidly becoming digital. Cities and their citizens can benefit from new solutions, for example, in Smart mobility or e-health. Digitalisation is also an important development for our economy, especially for the Brainport region where I am coming from. Innovation creates new markets, it brings new jobs and improves life in the city.

However, this cannot happen at the cost of our democratic values, at the cost of safety or of freedom of participation for our citizens. Technology should work for the benefit of people. To ensure this is actually happening in the public space, Eindhoven in close co-operation with Amsterdam, has developed a set of principles, ‘rules of the game’ for all parties who are working on new solutions in the digital public space: companies, governments, public institutions and so on.

We call this ‘the Principles for the Digital City’. It is about the data of our citizens and of our cities. Digitalisation of public space is a new game where the cities should define the rules to ensure that social benefits are protected and to establish a level playing field where everybody can develop innovative digital solutions and services to improve life in the cities. We require that all parties accept social responsibility, respect privacy, ensure safety, transparency and openness of the new digital infrastructure and data collection. The rules of the digital game should be fair for everybody. This way we can ensure that our citizens are safe, their rights are protected and they can participate in the development of the digital city, just like they already do in the physical city. This way our companies can work on socially responsible business models, that are future proof and are in line with the norms and values of our society. Together we can become the smart society of the future.

Recently the VNG, the association of Dutch municipalities, has recommended the Principles for the Digital City to be used by all Dutch municipalities. However, this is not enough. The principles have now to be implemented in practice. To do this, together with other cities and the national government we are working on local, national and European regulations that are based on the principles of transparency, openness and fairness for the digital public space. Together with companies, academic institutions and our citizens we are testing and adjusting the new rules, to ensure that they work in practice. This way we create transparency and certainty for our citizens and for our companies that want to develop new solutions for smart cities and digital public space. The digital city should be inclusive, transparent and sustainable, as the physical cities are.