Amsterdam, Barcelona, Madrid and Vienna pledge to the European Pillar of Social Rights

So far, Eurocities has gathered 73 pledges from 45 cities, representing over 55 million citizens and totalling an investment of over €15.8 billion.

Bianca Faragau-Tavares, Senior Policy Advisor at Eurocities said at the Social Affairs Forum that “we call them commitments but they’re actually actions on the ground.” She declared many cities are committed to guaranteeing equal opportunities, and this effort has been recognised at the EU level.

Ahead of the 2023 European Year of Mental Health, Amsterdam commits to improving its citizens’ mental wellbeing, framed into the principles of equal opportunities, health care and essential services of the European Pillar of Social Rights.

Research shows that mental health has been negatively impacted in recent years. One month after the first lockdown, one in three inhabitants in the Netherlands’ capital was “experiencing psychosocial complaints, such as stress, anxiety or loneliness,” states the pledge.

Indeed, 305,000 inhabitants face moderate mental problems, while 61,000 suffer from at least one mental severe problem. For that reason, the pledge’s primary goal is that “by 2030, fewer Amsterdammers will be withdrawing from education, work or society as a result of mental problems.”

The city has led the movement Thrive, which acts as a network to boost psychological well-being since 2019. Via Thrive, the city focuses on three groups: young people, those with migrant backgrounds and employers. A total of over €1.6 million will be invested from late 2019 until late 2022.

‘Mental Health First Aid’ is another example of Amsterdam’s commitment. It could be described as a ‘first aid’ course for psychological problems. It trains participants to recognise mental issues more quickly and to refer people to a suitable form of support where necessary.

The project ‘Gatekeeper Training’ focuses on strengthening the communication skills of professionals so they can support people who express suicidal thoughts and refer them for help where necessary.

The pledge also contemplates the need for resources in some of the most deprived areas since “we as a city have to invest unevenly to reach equal chances for all our inhabitants,” adds deputy mayor of Amsterdam Simone Kukenheim in the pledge.

The deputy mayor highlights the importance of psychological well-being. She says, “we invite other cities and the European institutions to join us in improving the mental health of all our citizens.” 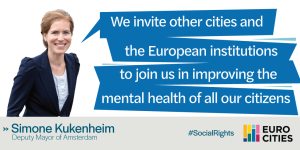 Barcelona commits to having a municipal plan on gender policies. In its pledge, the city declares the gender factor determines other local policies due to its cross-cutting nature. That’s why, says Deputy Mayor of Social Rights, Global Justice, Feminism and LGBTI at Barcelona city council, “this commitment includes the council: recruitment, a gender perspective, dynamics changes.”

The council integrates this vision into the municipal budget, with a 41% positively impacting gender equality. Moreover, a minimum of 5% of the local funding is allocated for gender equality promotion activities.

Barcelona City Council is an international reference in gender equality policies. At @EUROCITIES Social Affaris Forum, we pledge to foster these key policies and share our experience with other cities. #SocialRights #inclusivecities4all https://t.co/EeAwQSRHH9 pic.twitter.com/KcYRzg1S0Q

The Second Plan for Gender Justice (2021-2025) frames the council’s responsibility “at removing the structures that cause inequality between men and women, and between women in Barcelona City Council’s structure and operations,” the pledge states.

More concretely, the Second Plan acts in four strategic axes from the institutional level to the domestic sphere. It aims to consolidate an organisational change to ensure gender mainstreaming in the council’s functioning, practices, public management tools, and culture. It seeks women’s rights at the city level, focusing on social, cultural, and all representation-related aspects.

The plan also considers neighbourhoods and focuses on promoting, from a feminist and cross-cutting perspective, residential areas and urban spaces that put everyday life at the centre.

The last axe focuses on the economy to achieve a fairer and more socially and environmentally sustainable model. This could guarantee dignified lives for women and the satisfaction of their needs based on the recognition that all jobs are necessary for the subsistence, reproduction and wellbeing of the population.

But Barcelona is already a city model regarding gender policies. According to Pérez, “for more than 30 years now, Barcelona has been a pioneer in the field of gender equality.” 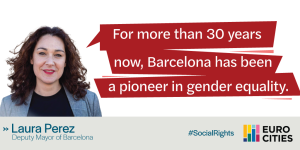 One of their most relevant projects is a service of specific ambulatory care to victims of gender violence. The council has also created a campaign to give women’s information and communication technology projects visibility, recognition, and support. This goes hand in hand with the commitment to improve the conditions of the most feminised and precarious occupations.

Also, since men are also gendered, Barcelona opened a centre of masculinities, a municipal facility aimed at the male population that seeks to promote more open, respectful and healthy relationship models.

In the most recent statistics (2018), almost 3,000 homeless people were counted on the streets of Madrid. As stated in the pledge, “650 of them were living on the streets, 675 in inclusion flats, 1,250 in public supported shelters, 190 in centres for foreigners and 234 in settlements.”

Faced with these numbers, Madrid is pledging to combat homelessness. The city declares to “consider homelessness one of the most extreme manifestations of social exclusion.”

In total, €26 million are budgeted to eradicate homelessness in the capital. Madrid focuses on new strategies but also on improving the current facilities.

The council set aside over €6 million per year for two methodologies: housing first programmes and housing led procedures, creating 210 and 180 available places, respectively. €2.5 million will be used for on-the-street intervention, and €13 million will address the adaptation of shelters, harm reduction and pet intervention.

“With these actions, we want to guarantee their basic rights with a preventive, comprehensive and transversal perspective,” says José Aniorte Rueda, Delegate of the Government Department of Families, Equity and Social Welfare at Madrid city council in the pledge. 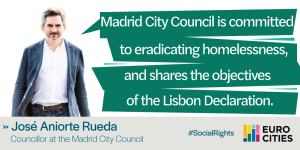 Among the actions, an additional €4.4 million are allocated to create specific resources for new profiles that increased in the streets of Madrid in the last years: women and youth.

An example is the “No Second Night” programme, which ensures preventive care for those women living on the streets. Also, the Beatriz Galindo shelter centre was launched last year to accommodate women victims of gender violence.

In the same way, resources for young homeless people will be implemented in the following months.

Integration into the labour market – pillar 4

The highest unemployment rates in Vienna are among those with no educational qualifications: 19.3% of women and 20.2% of men.

Based on those numbers, the city focuses on education and youth. This pledge actively supports employment for the Austrian capital and “constitutes an important step in the fight against poverty.” For that, the integration of youth into education and the labour market is essential for the municipality.

With this aim, the municipality collaborates with institutions in social affairs and health law. The U25 service operates to boost youth long-term employment and guarantee an independent income.

Peter Hacker, Executive City Councillor for Social Affairs, Public Health and Sports at Vienna city council, adds that in Vienna’s pledge, the U25 has a pioneering function and that Vienna “offers the best possible support and assistance to adolescents and young adults in their transition from school to work to enable their sustainable integration into the labour market.” 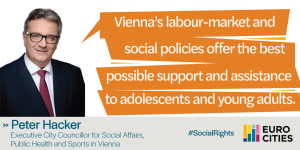 With this, Vienna reaches five pledges. Previous commitments have been presented to pillars 11 (childcare and support to children), 2 (gender equality), 19 (housing and assistance for the homeless) and 20 (access to essential services).

For Faragau-Tavares, these new times are about “looking back to move forward.”

Adapting to the circumstances and focusing on recovery, Eurocities campaign ‘Inclusive cities 4 all’ has been renewed into ‘Cities 4 Inclusive Recovery’.

“Today, we’re renewing our campaign with the focus on the recovery to ensure a fair inclusive recovery for everyone,” says Faragau-Tavares.

This campaign engages city leaders to prove their commitment to putting principles into action through dedicated social investments at the local level.

The cities above have all pledged before to other pillars. Amsterdam had already pledged to equal opportunities and education, training and lifelong learning. Barcelona has done so to minimum income and housing and assistance for the homeless. Madrid previously pledged to childcare and support to children, active support for employment and gender equality.

These four pledges were announced at the Social Affairs Forum 2022 hosted by Barcelona from 11 to 13 May.

All pledges are available at www.inclusivecities4all.eu