On 7 May the ‘Cities4Europe – Europe for citizens’ campaign was officially launched.

Don't know what the campaign is about? Take a look at our video:

Philippe Close, mayor of the city of Brussels, welcomed other speakers and the participants before European Commissioner, Karmenu Vella gave a keynote address. The Commissioner strongly supported the key messages of the campaign – to involve, inspire and impact – while highlighting the central importance of people in city life.

Ada Colau, mayor of Barcelona, who unfortunately could not attend the event, sent the following video message (in Spanish):

Daniël Termont, president of EUROCITIES and mayor of Ghent, opened the panel debate, sharing his pride in the 85 cities that have, so far, shown their support for Cities4Europe.

.@DanielTermont in public debate of #cities4europe: "I am convinced that in 10, 20 years time decisions will not be made in the city hall anymore, but by the people on the street. And the role of politicians will change fundamentally."

During the panel debate, Gilles Pargneaux MEP, said that "participative democracy and citizens' consultations have the potential to reconnect us with the European project."

Philippe Van Parijs, the Belgian economist and philosopher, suggested that a key part of citizen participation relies on a two way dialogue, in which local people also suggest ways in which they can help. This point was shared by Saskia Sassen, the sociologist and professor, who said that we need to use technology as an enable to tap into people's ingenuity.

'There is so much intelligence among citizens, use technology as an enabler and tap into that' @SaskiaSassen #Cities4Europe #EuropeforCitizens pic.twitter.com/58DB0pYYyS

The debate was followed by a cultural reception, which featured the vernissage of two paintings by Vincent Glowinski (Bonom), and a performance by artist Nayra Martin Reyes (EUtopia).

The evening concluded with a political summit and dinner hosted by the mayor of the city of Brussels, Philippe Close, at the City Hall, with the presence of more than 50 EUROCITIES political leaders, who discussed the role of cities in building a more citizen-focused society with:

Daniël Termont, president of EUROCITIES and mayor of Ghent, said:

“It’s time to change the way we do politics in Europe. The EU needs to listen more and engage more with its citizens. As local leaders and members of EUROCITIES we are committed to include our citizens in a dialogue about our future.”

May 7 marked the beginning of a fantastic journey that will lead to the organisation of more than 200 Cities4Europe events in the 85 EUROCITIES member cities that have already joined the campaign.

The full list of events is available on this link http://cities4europe.eurocities.eu/eu-campaign/index.html#/all-activities

You can watch the full debate here

Take a look at the photos here: 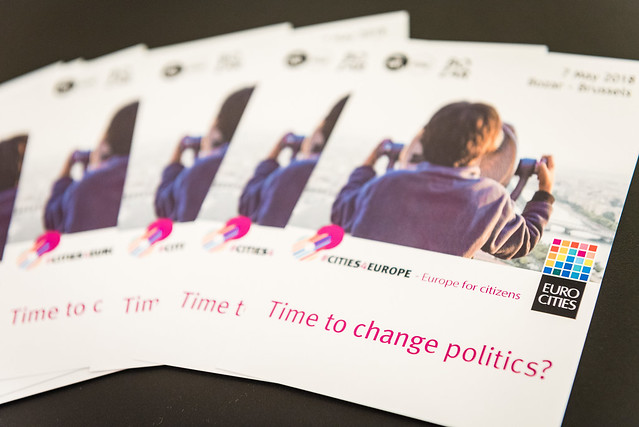 ...And get involved yourself: send us your ideas on the future of Europe by filling out this online postcard!

Citizens ideas on the future of Europe, and cities recommendations on how to involve citizens in the decision-making process will be presented at EUROCITIES 2018, taking place in Edinburgh on 28-30 November 2018.

Let’s make a difference together!